The Juxtaposition of Processed Plant-Based Burgers

Previous Next
The Juxtaposition of Processed Plant-Based Burgers

You’ve probably been hearing a lot about all of the new plant-based burgers coming into the market. Beef burger replacements are exploding. I am always intrigued to see new technology applications in the food space. However, I have a lot of issues with all of it.

Some of the emerging plant-based “beef-like” burgers are using fear factor marketing, with claims that by choosing a non-beef burger, you can help reduce climate change. Worse, they are targeting the beef industry as a big player in global warming. This is a marketing tactic. Yes, beef production does emit some greenhouse gas in the form of methane, but it certainly isn’t the only contributor. I can’t blame the beef industry for being unhappy when these products are marketed that way, which is probably why they often refer to these newer plant-based burgers as “fake meat”.

I feel there can be a place in the market for all sorts of burgers, but I don’t always agree with the “why” when it comes to making that choice.

Impossible Burger started the buzz with their plant-based, ground “not-meat”, that bleeds like an animal product. They offer the product in restaurants and earlier this year launched it in the Burger King chain as the Impossible Whopper®. It’s also being added to other restaurant menus nationwide. 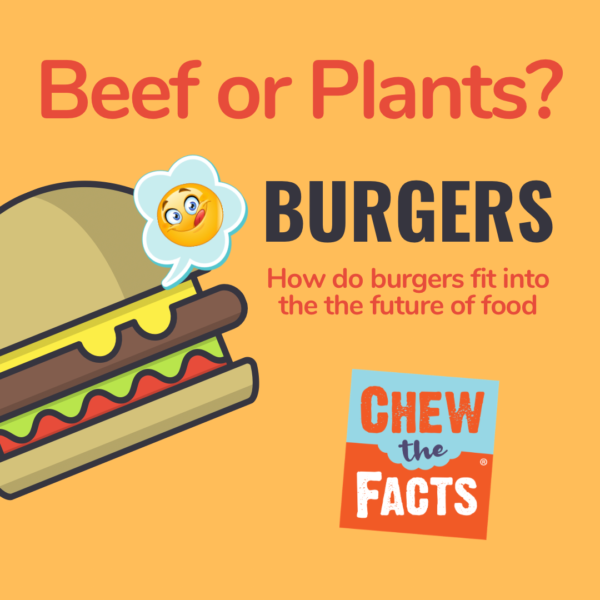 Other new vegan burger options include Beyond Meat™, and MorningStar Farms (owned by Kelloggs). MorningStar Farms recently has rebranded some of their products, and have new ones coming into the market. While Impossible Burger™ is found in restaurants, Beyond™ products will be available to buy and cook at home, MorningStar Farms® brand has been in the freezer section for decades offering plant based options for vegetarians (bean burgers, frozen mixed dishes, frozen breakfast items). In addition to these, the Kroger grocery chain has announced they’ll be launching their own store-brand plant-based burger, along with Nestle and Tyson jumping on the wagon.

Some products use soy, which has been used for years. Soy is an economical an “extender” of ground beef (providing more cost-effective nutrition for tight budgets). Soy also has health benefits in addition to being a good source of protein.

Even if a plant-based burger ends up being good for the environment, does the final product stack up nutritionally? Should we throw nutrition to the wind in favor of potentially lowering greenhouse gas emissions in one small sector?

There have been several news stories about the impact processed food may have on health. Processed foods such as canned beans, canned fruits and vegetables, and many frozen foods, certainly have a place in a healthy diet. Too many processed and packaged foods however, aren’t a great fit for a healthy meal plan (those high in sodium, sugar, or saturated fat, and lower in other important nutrients).

You should eat more plants, no question. However this advice, especially in the context of the DASH diet, means eating more whole fruits, grains, vegetables, and using plant oils. While I like the idea of subbing a veggie burger into your diet once in a while instead of a beef burger, I personally prefer to choose the bean-type “garden” burger. Still processed, but not quite as much as Beyond™ and Impossible™.

Comparing a beef burger to both Impossible™ and Beyond™ doesn’t really add up to much difference nutritionally. While the plant-based burgers have higher iron counts, keep in mind that this is non-heme iron. Heme iron from beef is absorbed two to three times better than non-heme iron. The beef option is much lower in sodium (important if you have high blood pressure or kidney disease). Calorie-wise they are about the same so if weight management is of concern, replacing lean beef with plant-based burgers isn’t going to help you out.

Will Plant-Based Burgers Help the Environment?

These nouveau plant based burgers are being marketed as a potential “solution to climate change” (by reducing methane from cows), which has been heavily debated.  However, they are heavily processed and are competing among themselves for reasons that mostly have nothing to do with nutrition. Processed plant-based products (such as cheese, dips, meats, burgers) that “replace” other animal products often require a lot more packaging too.

There can be many reasons someone will choose a plant-based burger, but “it’s better for the environment” shouldn’t one of them (reducing your use of fossil fuels is a choice that has much more impact than a plant-burger). Much of the land that is farmed for livestock is not arable for fruits and vegetables. In addition, producers are continually improving their methods.

The theory that beef production has a larger carbon footprint than soy or wheat production is partly what is driving the creation of these burgers. But beef isn’t the largest contributor to greenhouse gas emission. “Sustainability” is the word of the decade, and it means a lot of different things to different people. Time will tell if these new foods really appeal to enough people. You are not going to choose an Impossible Whopper® very often if you are concerned about your health, and vegans aren’t likely to either. The market of a “bleeding burger” seems to be for people who like meat. So how does that help the planet? If these foods aren’t going to help the planet, how are these climate-fueled lifestyle choices going to impact public health?

I don’t think it’s realistic to remove animal agriculture from our farming environment or lifestyle. Animal foods provide nutrition and are important to the diets of developing countries. Is it realistic that replacing beef burgers with plant-based options is the best solution to feeding everyone?

So here’s a thought: Maybe quick service restaurants are the best place for these plant-based burgers? No matter how many people step onto their soapbox to announce “Fast Food is bad for you!”, people are going to continue to desire it. Some people eat it daily, occasionally, to celebrate or gather with friends. Others may eat it when on the road or traveling.

We don’t have to bash the beef industry to have both choices. Having a vegetarian alternative could help reduce the demand for beef (saving the best beef for the supermarket and higher end restaurants and steakhouses), and offer a vegetarian option, which is a win-win.

One advantage to having been a registered dietitian for over thirty years, is that I’ve had the opportunity to observe a lot of food and dietary trends. Often these trends are in response to an issue of concern. Many times, food becomes a political issue.  Food choices were driven by health concerns, late into the twentieth century. The food market responded to the concerns of the day. In the 1980s and 90s for example, diet and heart disease became a public issue. In response, “fat free food” was trending in the 80s and 90s. Later, carbohydrates were blamed for the obesity epidemic. Now, the plant-based food movement has pivoted from a focus on human health to a focus on the health of the planet, at a time when climate change is top of mind.

Environmental concerns about what we eat is nothing new really.  When I read Diet for a Small Planet in 1983 (the book was first published in 1971) it was uncommon to be thinking about food in the context of the planet, versus human health (and only food and nutrition students or “health nuts” read such books then). The time has come for solutions to climate change, because we have more technology and human innovations to be able to solve problems than we did in the 1970s.

If your goal is to cut back on red meat, it would seem the best solution from a health standpoint is to reduce portions and frequency, choose lean cuts, and eat more plants. For instance, you can try my 50-50 burger, or make your own veggie burger on occasion.

Fat-free foods and low carb diets have not reduced the prevalence of obesity, plant-based burgers are unlikely to solve climate issues. One food can’t have a big impact on a huge problem.

There are a multitude factors to analyze in order to create solutions to complex problems. Since the burning of fossil fuel is a huge contributor to greenhouse gas emissions, improvements within transportation industry is necessary to reduce our carbon footprint. Innovations in agriculture is likely the best strategy (agriculture has been quietly innovating for decades). It’s true that beef, and other ruminant animals, require more feed per pound of consumable meat, than pigs and poultry. However greenhouse gas emission (GHG) data is another story. Frankly, it’s difficult to get firm GHG emission numbers. Various resources provide everything from beef contributing 3% to 14% of all GHG emissions*.

Big issues like climate change often spur quick solutions that temper emotions over solving real problems (example – even though plastic straws contribute less than 1% of plastic pollution, you may feel better not using them). For instance, statements such as “beef requires twenty times more land per pound than other protein sources such as beans”, sound logical. However, in reality, the land used for cattle grazing is not always transferrable to growing plants.

For burgers, the final call will be consumer taste buds, affordability and availability. If consumers accept these plant-based alternatives, and they are environmentally efficient, great. Indeed, there are still many other factors to consider.

Understanding why consumers choose the food they choose is key. There is a lot of activism going on against cattle farming. Is the extra packaging planet-friendly or is fresh better? And what about affordability and choice? The nutritional needs of developing nations? Take cows away, and you remove the livelihoods of many around the globe, not to mention the reduced diet quality.

There’s a lot to think about isn’t there? If choosing a plant-based burger makes you feel better, fine. However,  it’s unlikely that a simple change in your burger habit will reduce greenhouse gas emission significantly, nor will it be a realistic solution to climate change.

What do you think?