Previous Next
Choosing Fruits and Vegetables

September is National Fruit and Veggie Month – a time celebrate all things fruits and vegetables and encourage consumers to eat more of them every day.

Are you avoiding some fruits and vegetables based on how they were farmed? Do you know the difference between conventional and organic farming? I see a lot of food marketed based on perceived virtues.

What does it all mean, and does it matter? Sometimes it’s simply a marketing tactic, due to the perceived “goodness” of such buzzwords.

Where does your produce come from? A farm of course! Buying local produce or locally raised livestock is great, but it doesn’t make the produce that’s shipped from California or Mexico a lesser choice. And of course many months of the year in the Northeast, items wouldn’t be available if not for a conventional farmer.

Man has been manipulating soil, moving plants, cross breeding and selecting seeds, fertilizing soil, and finding new ways to irrigate, for many years. These tactics are used as a way to increase the yield and quality of food. The output increased significantly with virtually the same inputs from the 1940s to present. Farmers are growing better crops, and more of them (outputs), on less land, with the same resources (inputs).

You can choose either Organic or Conventional fruits and vegetables, and know that you are making a good choice. Conventional farming practices are able to produce more food per acre than organic practices, so we need all types of farming. Organic food is sometimes viewed as a “better choice” by some, but the fact is, it is not significantly different nutritionally.

What exactly is Organic food?  In 1990, the Organic Food Production Act was passed in the United States. This act defined standard organic farming practices and acceptable organic production inputs which led to the agricultural certification – USDA Organic. This farming method means that the food was produced without genetically modified organisms (GMOs), without synthetic pesticides (other types of pesticides can be used), and without irradiation. 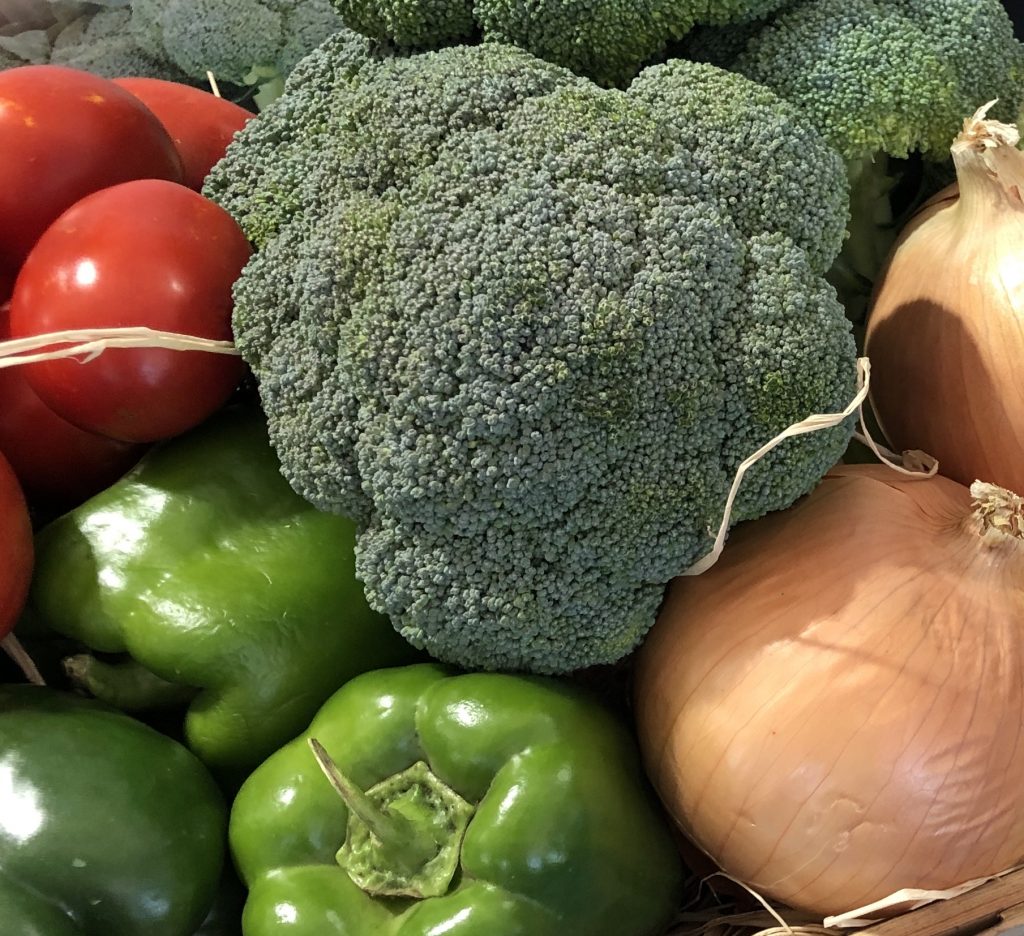 Myths and Facts about Pesticide and Herbicide Use

There’s a lot of confusion surrounding pesticide and herbicide which leads some people to choose organic. How and why are they applied, and what is the real risk?

MYTH: Plants are doused with herbicides to control weeds and pesticide to control insect.

FACT: Farmers take care to protect themselves and their workers when these chemicals are applied. Just as many of the household items you may have in your home or garage (bleach, bathroom cleaner, rubbing alcohol, gasoline) have the potential to be harmful, pesticides and insecticides are dangerous substances and need to be handled carefully. Farmers follow strict rules in terms of amounts used. As any toxicologist will tell you, “the dose makes the poison”, and this is important to understand when we are discussing pesticide residues on food.

MYTH: You should choose Certified Organic, because any amount, of any kind of pesticide is harmful to the food supply.

FACT: Certified Organic farmers can also use pesticides. To understand harm, you have to understand risk (keep reading for more on hazard and risk).

MYTH: Buying Organic protects you from Glyphosate. It’s true that organic food growers would not use glyphosate, but they may use other types of herbicides or pesticides. People have heard about glyphosate so often in the conversations about GMOs, there’s a connection – even though glyphosate is not involved in all GMO development.

FACT: Farmers use herbicides with caution. Yet they need to control weeds to grow the best crops. Glyphosate is a herbicide that controls broadleaf grasses and weeds. Toxicologists say it’s one of the safest herbicides. It is not likely to be carcinogenic (cancer-causing) to humans at the doses relevant to human health risk assessment (see more about dose is the Measuring Residue section below).

MYTH: You should avoid the “Dirty Dozen” list of fruits and vegetables and buy Organic only.

FACT: The residue left behind on all fruits or vegetables by the time it comes to market is very, very small. It’s measured in Parts Per Million (PPM). Consumer lists, such as the “Dirty Dozen” promoted by the Environmental Working Group (EWG) use flawed methodology to determine residue, and also don’t match the residue to human tolerance levels.

This is unfortunate since there are science-based risk assessments, and consumers may be unaware.

A part per million (PPM) is equivalent to 1 milligram of a chemical substance per liter of water.

This would also look like one second in eleven and a half days. Or one single grain of sugar among 273 sugar cubes.

The EPA uses risk assessment to characterize the nature and magnitude of health risks pesticides may pose to humans. This helps determine the inherent toxicity (hazard) of the chemical.

A Hazard is the property of a chemical having the potential to cause adverse effects with exposure. Risk however, is the probability of the adverse effect occurring. So for instance, if you do not work on a farm, your risk from a pesticide or herbicide is much lower than the worker who does the applications each year (yet also takes care to do so safely).

Residue levels are measured, and tolerance levels are very specifically defined. The “absolutely highest tolerable level” of a pesticide is where no observable adverse effects is identified (NOAEL). Crops found to have this level are removed from market (even though there’s no observable effect).

There are also “acceptable daily intakes” (ADI – a toxicological safety limit that specifies the amount of a substance can be ingested every day over an entire lifetime without harm – this is usually hundreds times less than the NOAEL). In this case, crops may be assessed on a case by case basis, and prevented from getting to market if necessary.  The Maximum Residue Levels (MRL) is the highest amount of an active ingredient allowed for the product to go to market (lower than the “Acceptable daily intake).

I always buy strawberries that are either on sale, look the best and are the least blemished. They may or may not be Organic, and I don’t view the Certified Organic label as a criteria for either quality or nutrition. Produce always varies no matter where it comes from. I choose based on quality and cost.

Since strawberries are often one of the fruits on the Dirty Dozen list, let’s take a look at the amount of pesticide residue present, and put it into perspective.

Considering the above information about Tolerance Levels of pesticides, you would have to consume 1100 pounds of strawberries per day to potentially pose a risk from pesticide residue! 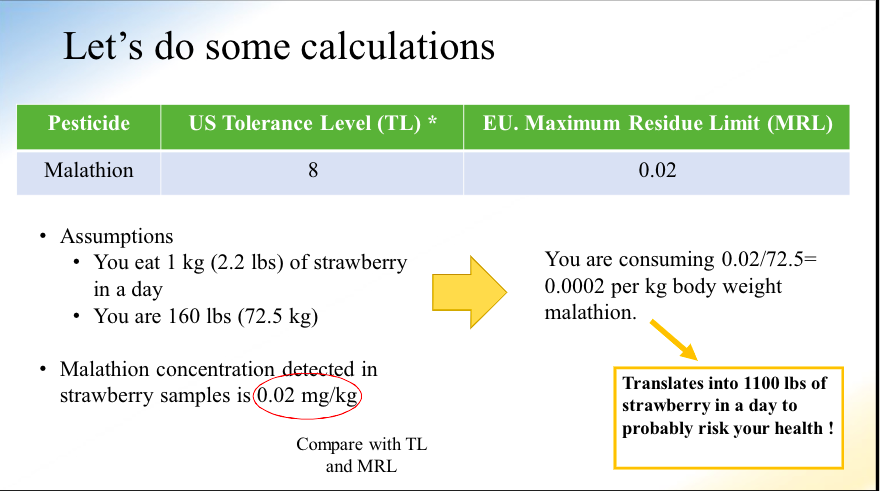 The slide and math shown here is from Dr. Golmomahadi, Assistant Professor at the Department of Nutrition at West Chester University of Pennsylvania.

No Worries, Have a Plant™

The Produce for Better Health Foundation tagline is – Have a Plant™ This message is in promotion of eating more produce – in all forms.

The takeaway here is eating more fruits and vegetables outweighs any small risk. Take the pledge to eat at least one more fruit or vegetable every day!

Some of the information cited here was sourced with permission from slides from a session about pesticide residue at my state’s annual nutrition meeting, titled, “Organic and non-organic foods and pesticide residue: Important information for nutritionists and dietitians”, presented by Amir Golmohamadi, Assistant Professor at the Department of Nutrition at West Chester University of Pennsylvania.