I recently attended a session (sponsored by Dupont’s health division) that shared preliminary results of an International Food Information Council Foundation (IFIC) consumer survey. The December 2019 survey shared consumer perceptions of plant alternatives to meat. One thousand interviews were conducted among adults aged eighteen and over, from December 20 to December 21, 2019.

Some suggest that since these new meat alternatives look and feel like meat, they appeal to omnivores. In this survey, two thirds of the 1000 survey respondents identified as omnivores, and about half have tried a plant alternative to beef or other red meat (such as pork sausage). 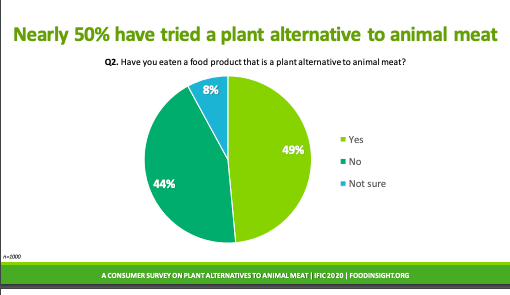 Curiosity and the enjoyment of trying new foods were reported as top reasons for checking out these new products. Over fifty percent of survey participants said they were trying to eat less meat, and had concerns about how meat is affecting the environment. 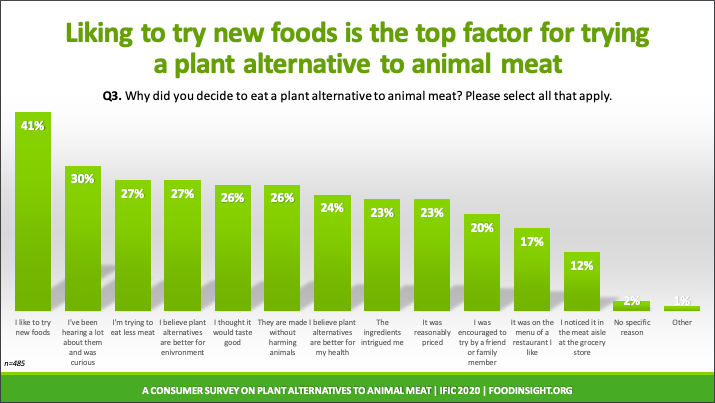 Veggie burgers have been around a long time, so why the sudden interest in these new plant alternatives? Registered Dietitian Kris Sollid, Senior Director of Nutrition Communications at IFIC, thinks that people may be looking for a meat “experience” in these new products. This could be why these newer plant burgers have gone beyond the interest of what the traditional veggie burgers ever achieved.

“One reason may have to do with the advancement and application of newer food processing technologies, and people’s slow, but growing acceptance of them. Some of these newer technologies have enabled the creation of meatless products that deliver an experience which is much closer to that of eating a beef burger than the original veggie burgers offered. Even though that was never the intent.” says Sollid.

What Does Plant-Based Mean?

Everyone’s familiar with the margarine in the tub that you see at the supermarket. They used to simple be referred to as “vegetable oil spread”, but some are now being marketing as “Plant-based butter”. According to Sollid, the term “plant-based” does not have an official meaning. Much like other catchy food terms like “clean” and “natural”, the term “plant-based” is not clearly defined. Yet we are seeing this term used to market all sorts of products.

“It’s a phenomenon that goes beyond the meat aisle. According to IFIC’s 2019 Food & Health Survey, most people believe that a “plant-based diet” means a diet that does not include animal products, or contains minimal animal products. Sollid thinks this may lead some people to believe that products labeled as “plant-based” are inherently “better.” says Sollid. 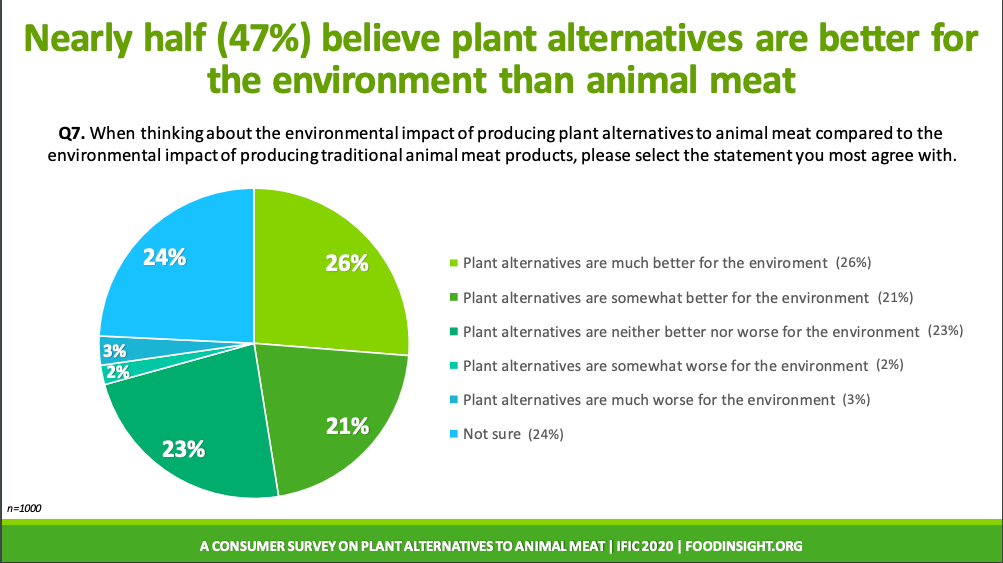 I’ve written about the Nutrition Facts label before, and it recently got another overhaul. This survey also gives us some insight on how consumer’s perceive this information.

What intrigued me the most, is the consumer’s interpretation of the Meat Alternative and Beef Nutrition Facts labels, when blinded. When given the labels side by side without an ingredient list, almost half (45%) of respondents viewed the plant based meat alternative (Product A) as “somewhat healthier” or “much healthier” than the meat label (Product B). Only 25% thought it was less healthy. This is interesting since the plant-based product is lower in protein and higher in calories, saturated fat, and sodium. 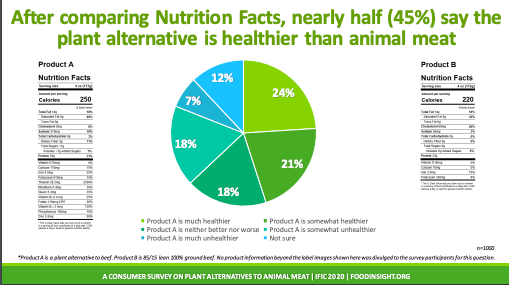 This was surprising to me. Does this suggest consumers don’t realize that saturated fat and sodium are both nutrients that most people need less of in their diets?  “It’s an interesting point you raise. It’s hard to know exactly what about the Nutrition Facts label influenced opinions the most”, says Sollid. “Per serving, Product A (the label for the plant alternative in the survey) did contain 30 more calories, two more grams of saturated fat, 305 more milligrams of sodium, and four fewer grams of protein.”

Yet it also contained the same amount of total fat, no cholesterol,  had twice the potassium, more calcium, iron, and B vitamins. Zinc wasn’t listed on the beef label, even though beef is a good source of zinc, and a 3-ounce portion provides 5.4 milligrams zinc per serving. Sollid thinks the discrepancy in micronutrients might have been too much for some people to ignore. “If I had to pick one thing that influenced opinions the most, I’d probably say it was the relative length of the vitamins and minerals listed, some of which exceed 100% of the daily value”.

A New View on Processed?

For several years now, processed foods have been lumped into one category. You’ve heard news stories or celebrities telling you “don’t eat ingredients you can’t pronounce”. Or, “eat only what your grandmother would recognize as food”. These simple statements don’t really help anyone make better choices to achieve better health however.

This survey suggests that compared to other types of processed foods, these types of products are perceived as more acceptable.  Most people would consider a fresh orange superior to an orange-flavored fruit chew fortified with vitamin C. Why are folks more accepting of these processed plant alternatives to fresh meat?

“It may have something to do with certain indulgences that people just feel “better” about. That is, some of these plant alternatives to meat offer an experience that comes close to the experience of having a traditional burger. Some may feel the “near meat nirvana” is a feeling that they’re doing something that’s better for both their personal health, and the health of the planet. That feeling overrides any concerns they might have about eating something processed.”

Unless you’re channeling your inner squirrel, you are going to include processed foods in your diet. “Processed” does not always mean “unhealthy”. Canned fruits and vegetables, pasta, rice, breads, nut butters, cereals, oats, coffee, tea, yogurt, are all processed, but healthy choices.

It’s your choice. Adding more vegetable dishes to your diet is a good idea. These new products can be a good choice for anyone avoiding animal products. However, “plant alternatives to meat” are generally not superior in nutrition to their meat counterpart. How they may impact the environment, for better or worse, is still yet to be determined.