Previous Next
Taste of Budapest

Note: I attended a sponsored food conference in Budapest, in which part of my travel was paid for, however I was not compensated to write this post. I just like to write about food, and have always been fascinated with its cultural roots.

When I travel, I immerse myself in food culture. Just ask my husband. I’m all about dinner reservations, because I don’t want to miss out on sampling the best local food. Once we were in the mountains of North Carolina and our traveling companions wanted to stop at Subway. What? No, we’re finding some BBQ. And we did. A simple little building with paper napkins on the table and several sauces on the side. I never eat at chain restaurants when traveling if I can avoid it, but instead look for foods and beverages that the region is known for at locally owned restaurants.
For many cultures, food is love. It’s an integral part of who we are. Foods we ate growing up, foods our grandmothers made, foods our ancestors before us survived on. It’s all part of the fabric of a culture.  I recently visited Budapest Hungary to attend a sponsored food conference. Here is an overview of the food I sampled. 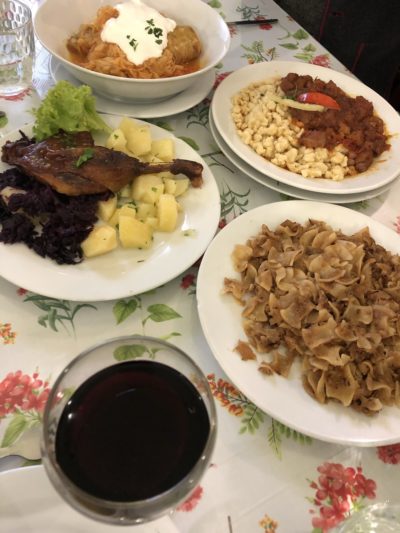 Before the conference began, I joined friends for a walking food tour in Buda with the tour company, Taste Hungary.
When you think of Hungarian style cooking, you may think of paprika. 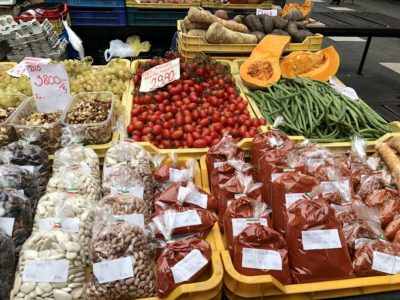 See the bags of red paprika?

In addition to paprika (which, btw, is made from a variety peppers – there are three types, sweet, smoked, and hot), their favorite dishes are pretty meat-centric. Hungarian paprika is generally “hot paprika”, whereas what you have in your spice rack is likely sweet paprika (even though it’s labeled as just Paprika). We strolled through the market, marveling at the spices, honey, fruits, vegetables, meats and cheese on display. 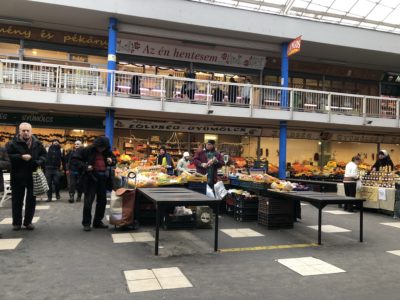 Lots of fresh fruits and vegetables available from venders. 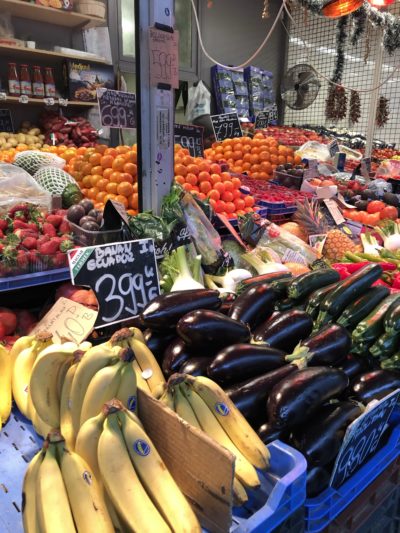 Many cuts of meats are much higher in fat than what we are used to in the US. Liver was more common. I don’t prepare liver much, but I do like it when it’s used as an ingredient (we enjoyed a delicious appetizer with chicken liver at one night). Duck legs are often offered on the menu, and the duck I ate was some of the best I’ve had. 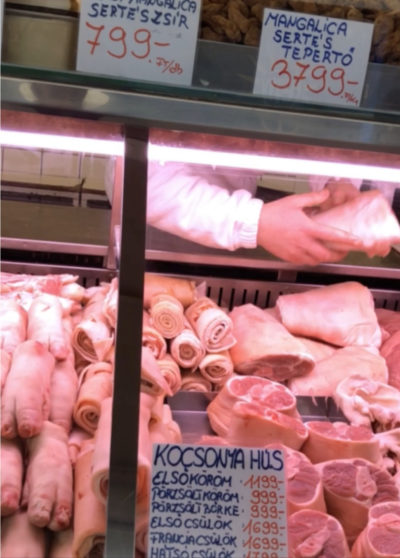 A traditional street food is Langos. This is a fried dough (similar to Italy’s zippole). The dough is flattened (like a thick pizza), then fried, then topped with sour cream and shredded cheese. Our guide described it as a casual food that a family may pick up for the children on their way to an afternoon picnic. It’s not healthy, but I can see how it would help keep hunger at bay when you are out and about all day. 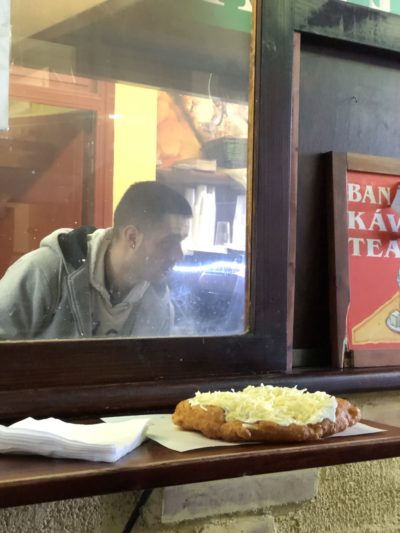 I also was adventurous and tried tongue, which is widely available in the food markets. I can’t say that I loved it, but if I hadn’t known it was tongue I would have though it was any other luncheon-style cured meat. The fried chunk shown in the picture here is fried goose fat. Whoa. It was so rich, I could only eat one small bite. 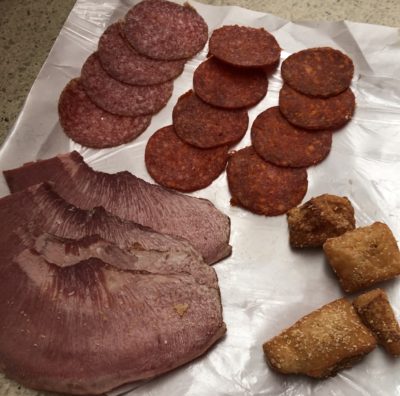 It’s hard to imagine after sampling pastries, meats, cheeses and fried dough, we’d be hungry, but lunch was also included on our tour. We stopped at Grandmas for a large family-style lunch. 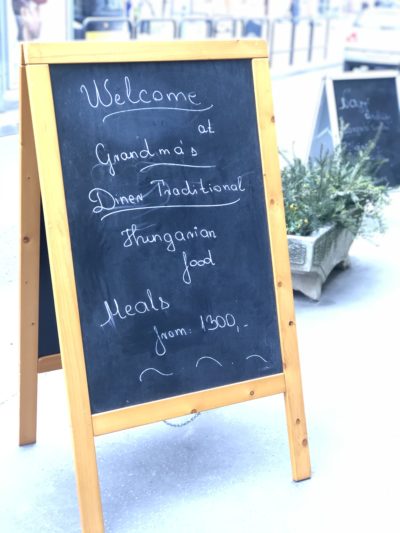 The meal, served family style included a duck leg with parsley potatoes and red cabbage, stuffed cabbage rolls, a traditional goulash, and cabbage with noodles. I loved the noodle and cabbage dishes I tried. They reminded me of the meatless Lenten meals I would pick up at local Polish churches on Fridays growing up in Pittsburgh. 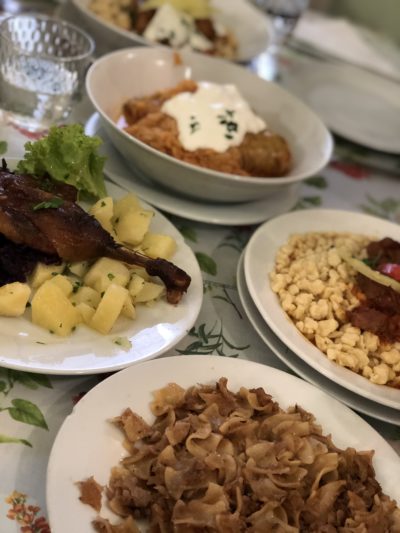 Duck and goose were included on many menus. 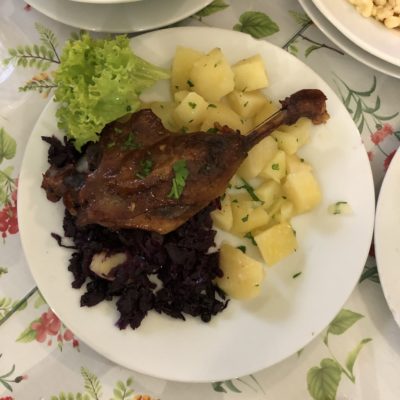 When in Hungary, you will consume poppyseeds. We also stopped by a wonderful cafe and bakery, Auguszt 1870 (in Hungarian, an “st” is pronounced “sh”. Add a “z” and it is pronounced “sssst”). Poppyseeds are a very popular ingredient. When there is less fruit in season, poppyseeds are used in desserts and pastry. You’ll see here a wonderful blueberry cream pastry, also filled and garnished with poppyseed. 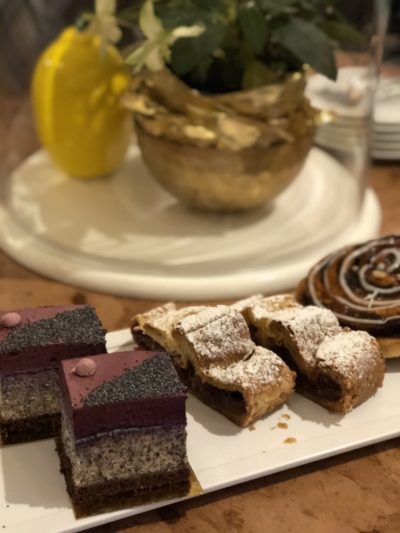 Loved the coffee service, on a platter with a small glass of water. 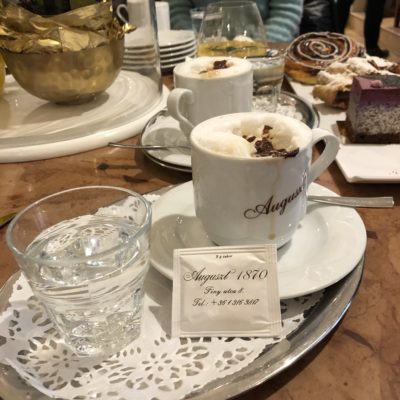 That evening we went to MAK Bistro and enjoyed these desserts, including a poppyseed macaroon (probably my favorite poppyseed dessert of the week. Unlike typical macaroons, it was not overly sweet). 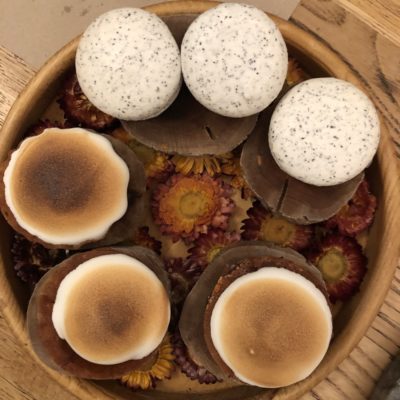 Poppyseed macaroon from the restaurant, MAK. Also shown here is a delicate cottage cheese based dessert, with a toasted meringue.

Last but not least, the popular Flodni is a traditional Jewish layered pastry. It uses thin pastry and many have layers of fruit filling, nuts, or poppyseeds. Apple or plum with poppyseeds and walnut is common. 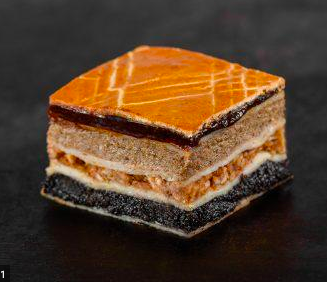 Our food tour ended in a cool “retro” cafe where we enjoyed a beautiful glass of brandy. Hungary enjoys spirits such as palinka and Unicum (an herbal, bitter aperitif). Palinka is sort of the grappa of Hungary. Considered a “fruit brandy” flavored with pear, plum or apricot, it’s mostly a strong shot of warmth. 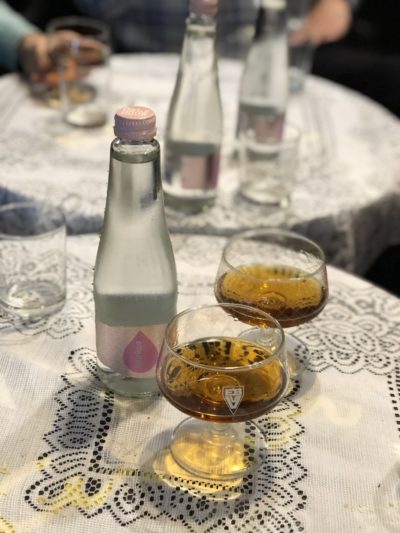 The Ruin Bars are creative spaces born from broken down buildings in the historic Jewish Guetto of Pest. 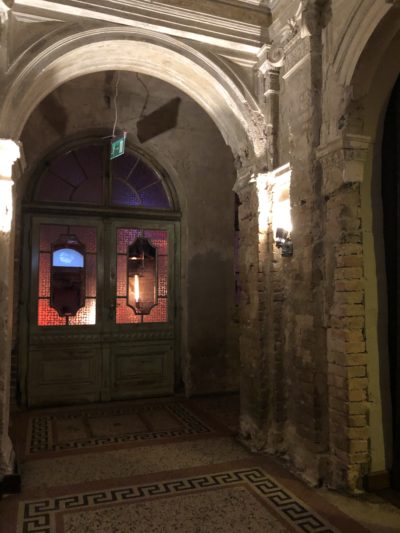 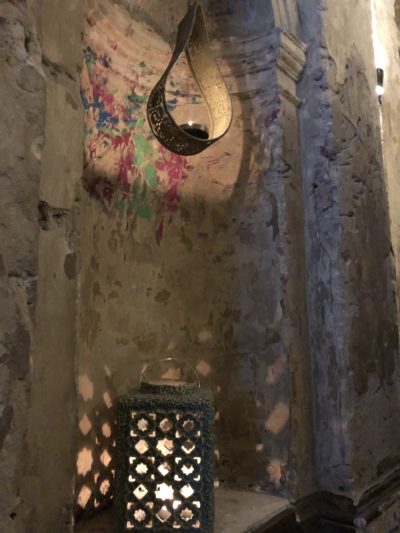 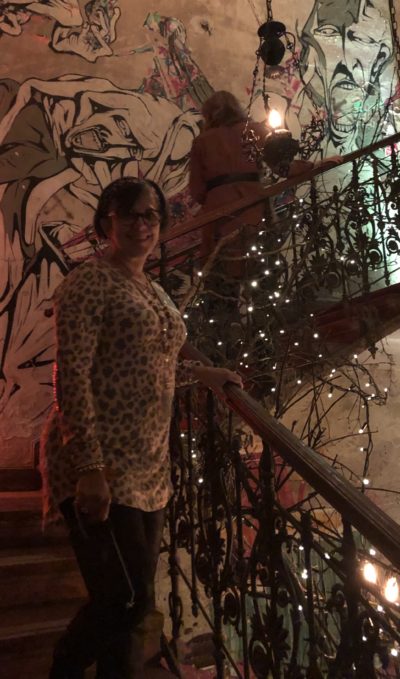 Creatives gambled on investing in ruined buildings, making them into cool spaces for young hispters to enjoy a drink and visit with friends. Many establishments in the Ruin Bar area are now more “shabby chic”, sort of a “Brooklyn of Budapest” feel, restoring what is old, with repurposed furniture and cool artwork.

Food is important to every culture. There is much discussion of late about food and the environment. I fear it’s dividing us further, when food should be bringing us together. There’s nothing better than sharing a meal with friends and family. Our current climate change conversations about supporting a healthy environment lean toward a plant-based or vegan diet. While I encourage that you add more plants to your plate, I disagree that we need to eliminate meat and animal products completely. In addition to the nutrition they provide, they are rooted in many cultural cuisines. Removing special foods from cultures (like the above duck, tongue, and goulash meats) would not only be disruptive from a culinary standpoint, but also from economic and cultural one.

I encourage you to embrace the local foods during your next travel. It’s a great way to begin learning about the culture.