Previous Next
Enjoying a Safe Food Supply – in Moderation

I recently attended a food conference where a session about animal welfare was sponsored by the USFRA (however I was not paid to write this post). One of the speakers, Brad Greenway, is a pig farmer from South Dakota, and I’ve used some of the content from his lecture to create this post.

According to US Farmers and Ranchers Alliance (USFRA) surveys, animal welfare is a top consumer concern, in addition to use of antibiotics, growth hormones, and how food is processed. Yet despite the facts that the vast majority of farmers treat their animals humanely on the farm, hormones are not used in pork or poultry, and antibiotic use to promote growth is now banned, people continue to falsely report these issues on social media or in conversation.

Whether you’re a carnivore or an omnivore, it’s likely you care about where your food comes from.

I enjoy listening to real people talk about the real things they do. So often in our 24/7 news and media storm, we hear soundbites, or see memes, short videos, and other sorts of media out of context. The food perspectives you’ll hear from someone who is vegetarian or vegan will differ from someone who includes meat in the diet, and those who prefer to purchase certified organic over conventional produce, will also vary in opinion.

I encourage everyone to choose their own version of a healthy diet and then work toward choosing foods they enjoy within that dietary framework, and their food budgets.

I personally eat according to the DASH diet guidelines, and also incorporate many Italian and Mediterranean ingredients. As the author of DASH Diet For Dummies®, I recommend that you reduce the amount of meat you eat, choosing smaller portions of leaner cuts.

However my personal eating style is not important. Neither is telling every consumer, “you should eat this”. What is important to me, is getting the facts to the consumer. Since people do indeed eat bacon, it’s important to dispel any myths about it’s food production. In that vein, this post is for meat-eaters. It is not intended to claim that one diet is better than another, nor whether or not you should consume bacon. It is about food safety.

Since food marketing is driven by consumer demand, the latest conversations seem to revolve over whether a food is “clean” or organic or “free” of something. I’ve heard consumers say things like “All of the hormones in our food are making us sick!” when in reality, hormones are not even allowed in pork or poultry, and are only used sparingly in beef cattle.

In the case of the meat industry, terms such as antibiotic-free, organic, or cage-free, are viewed as more important now, than say, the dietary fat content, or any other nutritional quality of the food. 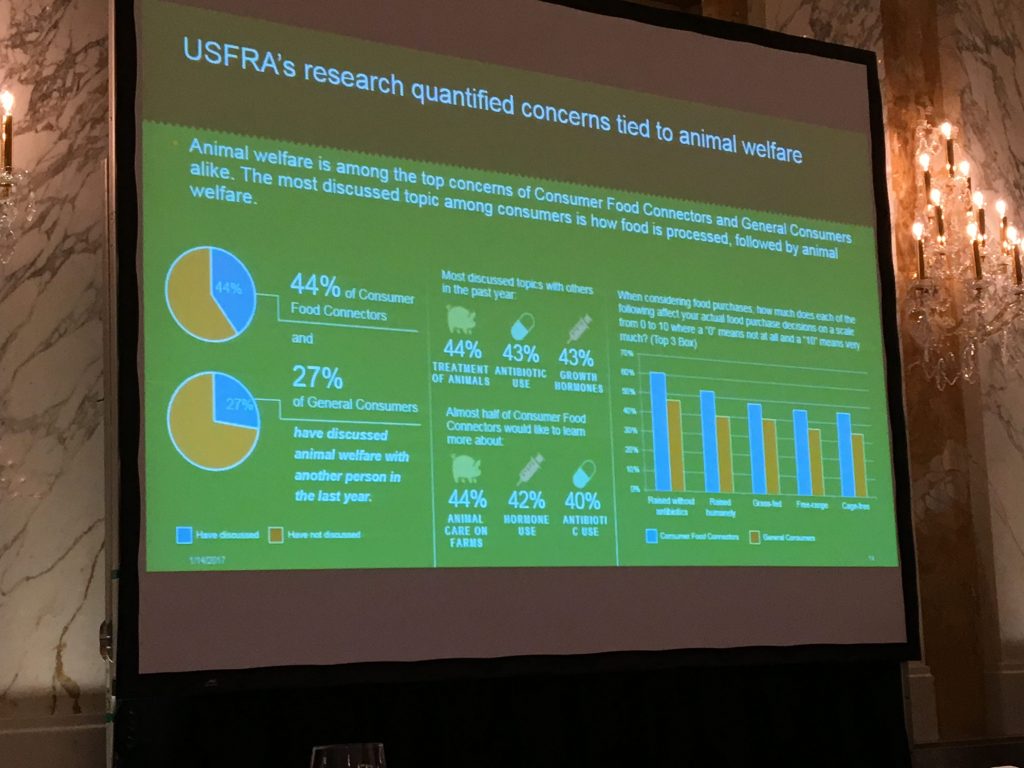 Brad Greenway isn’t just a pig farmer, he’s the 2016 American Pig Farmer of the Year. Every farmer I’ve met over the years has several thing in common: a dedication to family, the land, and the care of their animals. Brad was no different.

For those living in urban areas and big cities like New York, LA, Boston, or Chicago, the opportunity to speak with a real farmer, and see photos of their family, farm, and animals, can help connect the farm to the the people at the market. The USFRA supports this idea, and tries to bring the farmer to you, via the videos and stories on their website, and also in sponsoring farmers to speak to groups (as the one I attended).

A few things that Brad spoke about that are important:

The sub-therapeutic dose of antibiotics added to animal feed in the past supported animals that grew more quickly and stayed healthy, but farmers have slowly pulled back on this use of antibiotics, and as of December 2016, the FDA ruled that they can no longer be used to promote growth in food animals. Like it or not, consumer demand often trumps science when it comes to changes made at the market.

Hormones are not used in pigs. They are used is small doses to enhance the growth of beef cattle (they are not legal for poultry, pigs, veal, or dairy cows). These hormones are placed into the cow’s ear, and are slowly released over time.  In general, they allow for faster growth, resulting in enhanced production, using less resources.

Farmers work hard to be as productive as possible, both for their own welfare, the welfare of their animals, and to keep food prices reasonable at the market for the consumer. A diet lower in meat is healthier (if it is also balanced with plenty of fruits, vegetables, beans, and legumes), but despite the effort of myself, and many of my colleagues, to encourage people to reduce their consumption of meat, data shows that Americans are demanding more of it.

Regardless of the supermarket where you choose to shop, or the food brands that you put in your cart, I’m confident that your food is safe to eat. Farmers like Brad are feeding their families the same food you are eating. They have your best interest in mind. The next time you hear someone making a scary statement about “what’s in your food”, think about the source, ask yourself if there’s any fact behind the statement, look into it yourself, and help others see the farmer’s perspective too.