Previous Next
The Gluten Lie: Admitting Uncertainty is Hard

I’ve been writing about fad diets for years. Being “fad-free” has built the framework of my brand. While I’m the first to say that nutrition science has provided as many questions as answers, I’m more certain that promising “cures” or “quick weight loss” is a red flag that should cue you: Buyer beware. 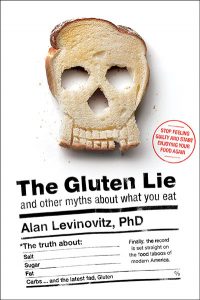 Alan Levinovitz sent me a copy of his newest book, The Gluten Lie, for review. It’s a fascinating read about how diet fads come to fruition through the eyes of a Philosophy and Religion Scholar. The author provides a review of popular fad diets, debunking popular books such as Grain Brain and Wheat Belly, and takes some jabs at ex-Playboy bunny Jenny McCarthy and Joseph Mercola for all of their fad-diet advice (the popularity of which sadly gave McCarthy a diet-guru platform. She’s now launched into an anti-vaccine crusade).

As Levinovitz highlights anecdotal diet therapies over the past century, he presents the idea that nutrition misinformation still looks like science, not religion, and this especially makes diet myths like those presented by Mercola easier to swallow. He notes how the language we use surrounding food choices bristle with moral and religious vocabulary. Words such as “good”, “bad” or “natural” attach morals to food. Current terms that make me cringe include “clean”, “whole” or “real” food – suggesting any other “type” of food is “bad” or “unhealthy”. The term “processed” is being used to elicit negative emotions, as you argue about whether an orange squeezed into juice at home is “better” than oranges squeezed into juice by “industry” (a.k.a. Big Food). You like to make things easy by simply making blanket statements that “Processed food is evil” and create your own definitions for such.

Alan reviews many aspects of fad diets, and how they come to be. In addition to examining the current gluten-free-craze, he examines fat, sugar, salt, and the idea of “detox”. He discusses the idea that the “fat free” craze of the 90s was misguided, which I agree, it was. (But I’m still on the fence about the role saturated fat plays in not just heart health, but brain health and cancer risk as well. For now, I’ll stick with recommending a moderate intake.)

The book introduces readers to the idea that many times, expert “opinions” are misinterpreted as facts. Topics often launch from a simple letter to the editor of a medical journal that create a country-wide falsehood that “x caused y”.

Levinovitz presents how this was the case with “Chinese Restaurant Syndrome” and MSG, and I can attest it was also the more recent case with high fructose corn syrup. I remember writing a paper about the MSG controversy while in college in the early 1980s. Symptoms of headache and general malaise, were blamed on the MSG ingredient in foods. I’d almost forgotten about “Chinese Restaurant Syndrome” until Levinovitz brings it up in the book. “No MSG” was once a banner proclamation, as we see today on food labels for “No high fructose corn syrup”. The “High Fructose Corn Syrup” scare was born after a letter to the editor was published about how obesity rates rose as high fructose corn syrup came onto the market. No proven cause, nor research, just observation of possible correlation written as a letter, but the letter took hold in the medical community and eventually made a huge impact on how the consumer perceived HFCS (disclosure: since I’m often called out as being a “paid shill”, I’ll disclose here. Having never bought into this HFCS scare, and because my practice is built on the idea of balance and moderation, I have worked with the Corn Refiner’s Association).

Can One Ingredient be the Cause of All Health Problems?

Levinovitz makes a strong argument that many registered dietitians share – it’s very difficult to blame one nutrient or ingredient on a host of ailments. Obesity in particular, is a very complex physiological and psychological issue, so the notion that if we simply took gluten or sugar out of the diet, it would stamp out obesity for all, is wishful thinking.

As humans, we like the path of least resistance, just as most mammals do. We want some things to be easy, since life is often so challenging. Yet we want to eat what we want. So rather than consider the effort in preparing a home cooked meal with fresh vegetables and homemade whipped potatoes, you decide to just eliminate the whole bread group and pasta from your diet, and avoid anything “packaged” (or some other food rule), and continue to eat everything else in sight – Then proclaim how much better you feel (as to not admit you may have been wrong, or that you really can’t sustain such food rules for more than 5 months).

The placebo-effect is real. We all experience it at one time or another. Sometimes it may even be a healthy defense mechanism, but other times – we’re just fooling ourselves.

In addition to writing and nutrition coaching, part of my work also includes serving as a nutrition communication consultant to the food industry. I spend much of my time dispelling myths that, as The Gluten Lie author points out, are the result of emotional outrage and anger from the unwavering faith people place in their own dietary diagnoses. I’ve learned that there is only so much fact you can put out there, because as Levinovitz points out:

“For true believers, the myth will always be more sacred than the evidence”

There is a strong notion that many physical problems may be brought on psychologically, and this is something that makes people feel vulnerable.

“When it comes to food sensitivities, people are incredibly unwilling to question self-diagnoses”

Doctors and dietitians certainly aren’t immune to the power of suggestion, as is witnessed by the plethora of books on the shelves promising miracle dietary cures authored by health professionals. Of course there are just as many, if not more, written by non-medical professionals too. However, while Levinovitz understands that some people do have food intolerances, and that gluten sensitivity and Celiac disease do indeed exist, he echoes the notion of many medical experts who agree that it’s not a healthier diet for those who do not need it. He writes:

“If we are serious about the quest for good health, physical and mental, we cannot be slaves to fear and to our desire for easy answers.”

That’s diet and nutrition misinformation in a nutshell. I guess I’ll just keep on writing about moderation, and how the science of food and nutrition fits into that, and not worry about who may believe me, or not.

© Rust Nutrition Services and Chew the Facts®. All rights reserved.
Sign Up for my Newsletter