The Crazy Truth about Moderation

Previous Next
The Crazy Truth about Moderation

The dose makes the poison.

Most scientists and medical doctors would agree with that statement. 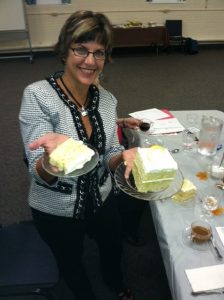 Moderation: It’s all about portion size.

Yet, some insist on distorting the facts. News articles you read offer to tell you “what’s safe to eat”. I’m hoping we are at a tipping point with the crazy articles that are printed about diet, nutrition and food. A recent article by Yvette Guinevere d’Entremont (aka The SciBabe, @sciencebabe on Twitter) got quite a few shares. Yvette (a chemist) challenges the popular fear-mongering Vani Hari (computer-science-turned-diet-expert), and pretty much came right out and said, “you are full of sh#t”. Ouch.

Well, someone had to say it.

There is no shortage of nutrition misinformation on the Internet. Unlike individuals like Hari, most registered dietitians have a broader view of health and disease, food, and how people eat (unfortunately there are even physicians who subscribe to the fear-mongering approach, singling out ingredients, or bashing certain processed foods).

Un-Food-Babe-like, I’ve reviewed real food records from real people all over the country (the University of Pittsburgh was the nutrition data entry center for the MDRD research on kidney disease and diet). I’ve also counseled thousands of individuals over the years, of all ages, and of a variety socio economic backgrounds, with a range of health and disease.

But rather than talk to the folks who actually work with people, and have a real background in nutrition science, let’s just fall for the latest “story” that we read on Facebook, right?

I have to say that it’s maddening at times, and I find myself siding with the chemists and biochemists. You should too. As The Science Babe said:

Reading Hari’s site, it’s rare to come across a single scientific fact. Between her egregious abuse of the word “toxin” anytime there’s a chemical she can’t pronounce and asserting that everyone who disagrees with her is a paid shill, it’s hard to pinpoint her biggest sin.

Ah yes, the paid shill. I’ve been called that name before. Everyone with expertise and a position in a certain field should shun employment. Sticks and stones love...

I admit, I am biased toward the chemist’s point of view. I’ve said many times, that food is chemistry. Yvette also wrote:

If I told you that a chemical that’s used as a disinfectant, used in industrial laboratory for hydrolysis reactions, and can create a nasty chemical burn is also a common ingredient in salad dressing [vinegar], would you panic? Be suspicious that the industries were poisoning your children? Think it might cause cancer? Sign a petition to have it removed?

My goal as a nutrition educator and counselor is to help people reach positive health outcomes by living a life that they want. This means eating foods they enjoy, and helping them find ways to do so, within their personal health goals. Everyone has individual preferences, means, and backgrounds. I completely disagree with approaches that claim certain foods or food groups must be eliminated in order to meet a health goal.

I recently attended a session about how dietary guideline reports become policy at the Experimental Biology conference in Boston. The three PhD speakers, were highly regarded in their fields, participated in the laborious process that is the Dietary Guidelines Committee (in 2010), and have quite a bit of research and life experience between them. Yet when I had a conversation with someone after the program he commented, “I wish they had brought in someone who represented other viewpoints.” You mean, someone with a different opinion?

Why? These individuals were presenting both what science can say is “proven” (strong evidence, i.e., a causal relationship established through randomized control trials), and what is “possible” (weak to moderate grade evidence). Opinion has nothing to do with it.