I had the pleasure of touring some of the apple orchards of Washington State upon invitation from Arctic Apples. Just when you think you know enough about farming, you realize there’s always more to learn. I was absolutely blown away about “where apples come from”. [The travel for the trip was covered by Okanagan Specialty Fruits, but the opinions I share here are my own].

One of my favorite lines in the film Good Will Hunting is when Will gets the girl’s phone number and throws it into his rival’s faces, stating, “Do you like apples?…Well how do you like dem apples?”.

Soon, there will be a new apple in town. It tastes great, and won’t brown. The first question that many people ask is “Why would we need a non-browning apple?” So let me start there…

Have you ever cut into a perfect looking apple to see that it’s brown and soft inside? Have you ever sliced a bunch of apples for a fruit tray, and even though you squeezed lemon juice on them, some of them still turn brown? Would you like to chop apples into your salads without them turning brown? Have you ever spent time packing lunches for your children in the morning, only to find the bag of sliced apples come home uneaten at the end of the day? 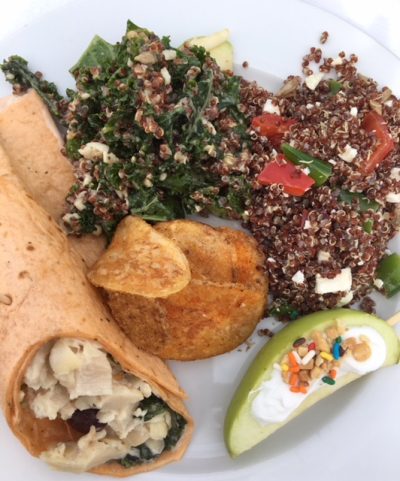 Arctic Apples® won’t do that. Having a non-browning apple on the market will not only curb food waste, but it opens up opportunities for new recipes utilizing apples. Apples are great sources of fiber, vitamins C, and potassium.

You may have an apple tree in your yard, like I do. Or you may even visit a local orchard. I grew up with several fruit trees in my back yard as a child – cherries, peaches, plums, pears, and apples. They were trees. The peach trees were small, but the cherry, apple and pear trees were pretty big. However, this is not where most apples come from.

If you’ve ever visited a winery, you’ve toured a vineyard. These apple trees look more like grape vines – strung on a trellis, bearing many apples, from a fairly small trunk. They are not big trees at all. During this tour, we got to see the whole process of growing apples on large-scale apple farms. Washington state boasts the largest apple production in the country, and apples are Washington’s largest agricultural grown product. 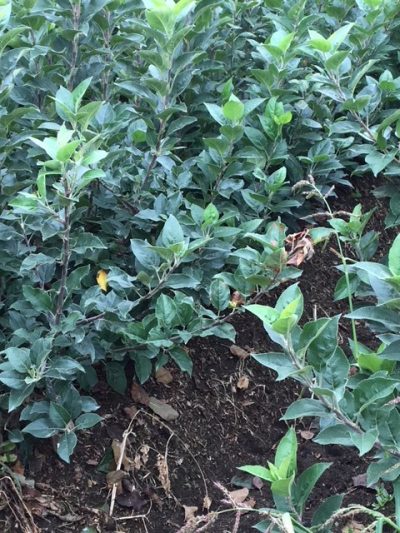 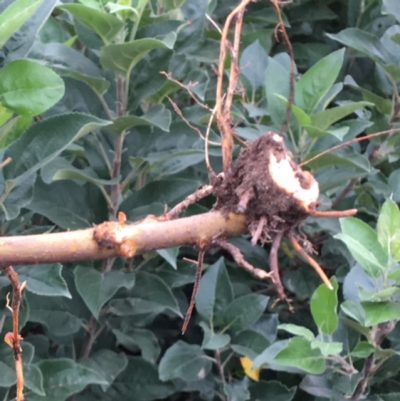 Each stem will provide the root for the apple tree. This root is no particular apple until the variety is grafted onto it. Some rootstock dates back to the late 1800s!

Some apple farmers specialize in just rootstock. Hundreds of rootstock acres are planted and sold to other apple farmers who grow apple varieties, using grafting or chipping techniques. Farmers use different grafting techniques in which a section of a stem with leaf buds is inserted into the stock of a tree. 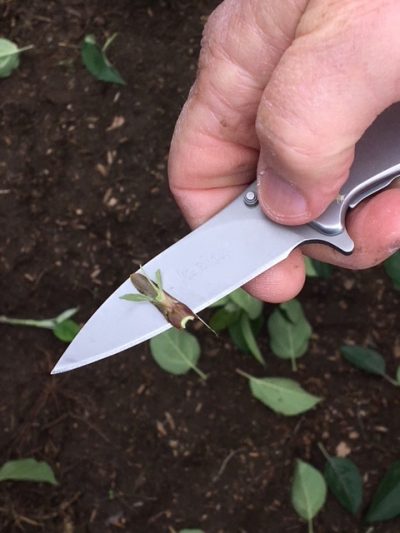 This “chip” will be inserted into the rootstock stem to create the desired variety of apple.

Another type of grafting is “budding”. A single bud or “chip” (see photo above) is inserted into a stock. All modern commercially grown apple trees are grown by grafting, rather than by planting seeds. 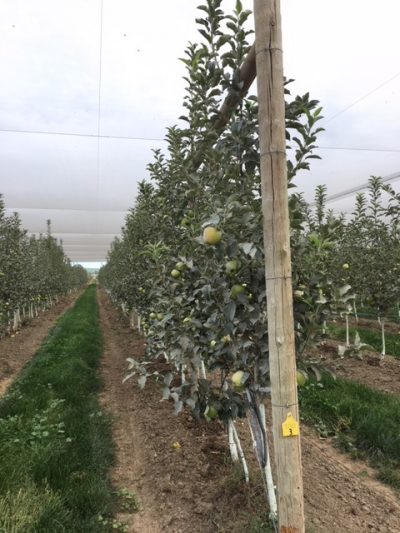 The modern apples distributed to your local grocery store use grafting.

The fact is, people don’t like eating brown apples. (hence the food waste). Neal Carter, an apple farmer and scientist, figured out a way to keep apples from browning by silencing the enzyme that causes browning. When an apple is bruised or cut, an enzyme called PPO (polyphenol oxidase) is triggered and causes oxidative browning. However, in the non-browning apple,  this enzyme is silenced. You get all of the same nutrition as regular Golden Delicious apples, but the Arctic® apple won’t brown when bitten, sliced or bruised.

Neal and Louisa Carter sought to address the stagnant apple consumption in North America by providing a new way to consume apples: Pre-sliced.

Less than two percent of apples are currently sold as fresh slices. Arctic apples will change that statistic, without using preservatives. Their hope is that ready-to-eat sliced apples will increase apple consumption in more Americans, just as carrot consumption increased with the introduction of “baby carrots” sold ready-to-eat in bags.

At this time Arctic Apples® will only be delivered to certain undisclosed markets. There are currently two varieties: Golden Delicious and Granny Smith. They’ll be delivered to market pre-sliced in a zippered bag (similar to how some grapes are packaged).