For several years now you may have heard messages that you should ‘limit refined grains’, or even that refined grains were bad for you and may raise your risk for disease. I attended a conference session sponsored by the Grain Foods Foundation that shared data about how refined grain messages got mixed into the “eat more whole grains” recommendation.

The 2015 Dietary Guidelines for Americans (DGA) states to “replace some refined grains with whole grains”, but the media has at times interpreted that as “avoid refined grains”. In turn, consumers began to associate all “white grains” with “an unhealthy choice”.

To reduce disease risk and balance nutrition, the DGA dietary recommends you eat:

What are Refined Grains?

Have you been avoiding refined grains like white bread or pasta? Or feeling bad when you do eat them? Well, there’s no evidence to show that refined grains are “bad” for you, but there is evidence that shows that whole grains are good for you. Somehow along the way, the message has been mixed up – putting a slice of white bread or a dish of white pasta in the same category as pie or sweet rolls. This may become a reality when a child is shamed in the lunchroom because her mom made her a PBJ on white, or if you bring a pasta salad not made with whole wheat pasta to a picnic. Gasp!!

It’s been interesting over the years to see some friends using whole wheat pasta exclusively because they thought “the other kind” was not a good choice (I’ve shared before that I don’t like whole wheat pasta, and use regular, usually imported from Italy). A bread lover from way back, I always have bought a variety of breads for my family – including white, Italian, French, and multi-grains.

The dietary recommendation is to make half of your grains whole grains. This does not mean “avoid all refined grains”. They too can fit into your diet. 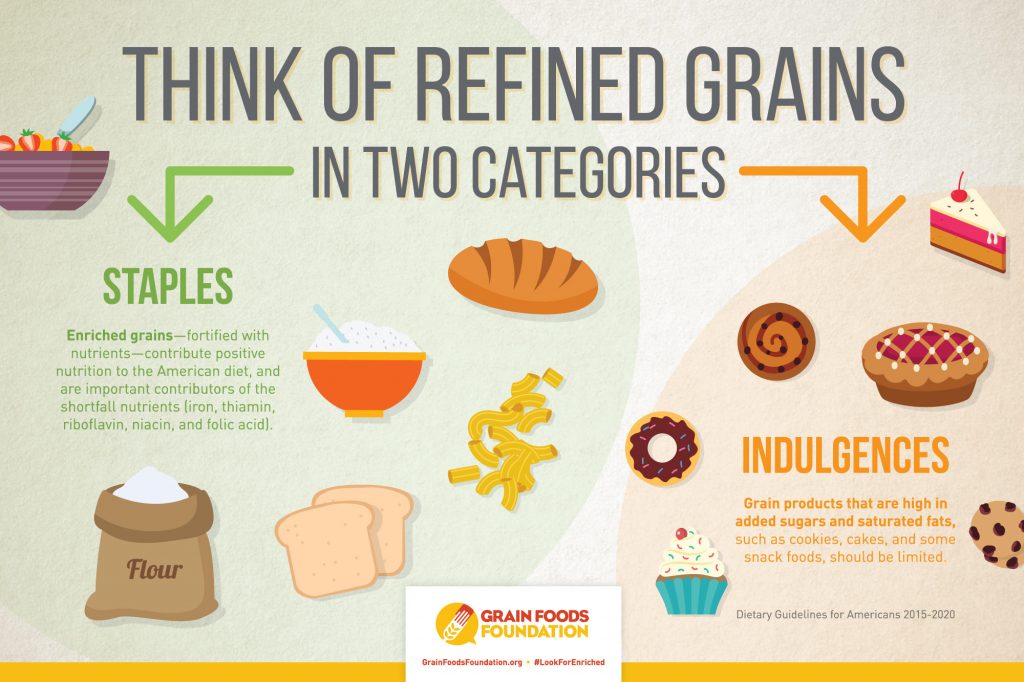 As you can see in this infographic, what the media often portrays as “refined grains” (white flour, rice, pasta, and bread) are lumped into the same category as what most dietitians would refer to as “sweets and baked goods”. Even when I counseled heart patients 25 years ago I’d advise them to include some high fiber grains (like a high fiber cereal, brown or wild rice, a high fiber bread, bun or English muffin) and limit desserts and sweets.

Let’s take a look at the actual evidence.

Studies show association between a dietary pattern and disease risk. But when you look at refined grains individually, there’s no relative risk. On the other hand, a Mediterranean diet and DASH diet have a strong potential for preventing diabetes. These dietary patterns do not eliminate refined grains (like white bread or pasta), but they do recommend limiting high sugar foods (high sugar grain desserts and baked goods for instance).

The research shows “high whole grain intake, but not refined grains, is associated with reduced type 2 diabetes risk”. This is consistent with the DGA – urging you to add whole grains to your diet.

Including whole grains in your diet, like multigrain breads, bran and oat cereals, brown and wild rice, farro, or barley, may reduce your risk of diabetes and other diseases.

You can however, still enjoy some refined grains (white rice or pasta, white breads or buns). But, you do want to limit the sugary stuff. Sure, enjoy a dessert once in a while (even every week), but not daily, and in small portions. Refined grains such as donuts or sweet rolls don’t really fall into the same category as refined bread (white, French, Italian) and English muffins for instance.

The DASH Diet follows many of the principles of the DGA, including the recommendation to consume whole grains in your diet. I support enjoyable eating plans. Balance, variety and moderation continue to support nutrition dogma that results in a dietary pattern that supports a healthy lifestyle. So include whole grains into some of your choices, but go ahead and enjoy that sandwich on white, your crisp rice cereal, or a dish of regular white pasta.