Light is Out, but Healthy is Still In – The End of an Era

Previous Next
Light is Out, but Healthy is Still In – The End of an Era

Nobody wants to ruin the holidays with “diet food”; certainly not me. But as you get older, you realize that something’s gotta give when it comes to calories and splurge foods. Taking a look at your family favorites. You may be able to tweak them just a little, so they are not quite as high in calorie or rich in fat (yep, maybe a half of stick of butter instead of a whole one). This can go a long way toward balancing nutrition for the whole family.

At least that’s what I think. Calories do still matter. It’s not just about the “macros” (protein, carbohydrate and fat). It’s also about balance and enjoyment. While it’s fine to splurge on a holiday, maintaining healthy habits and a healthy weight take sustained lifestyle changes over the whole year. Year after year.

A dietitian friend of mine were talking the other day about our long careers in food and nutrition, and how some things have changed a lot, and other things, notsomuch. We also noted how there is a big divide just about everywhere these days on just about every topic, and the dietitian community is no different. This was evident at a recent conference where there was a session debating HAES (Health at Every Size) and conventional weight management practices.

When I recently received my “Farewell Issue” of Cooking Light® magazine, this whole topic hit home. I realized that we really are at a new crossroads with food and health. I’ve had a subscription for this magazine since its inception in the late 80s, and used it as my weekly go-to for dinner for years and years. The magazine always offered tasty recipes that were easy to prepare, and older issues featured articles about fitness and healthy living as well. It kept me healthy and at a healthy weight through my forties, and kept healthy weeknight meals on the table for my husband and children, helping them develop healthy habits, and maintaining good health. 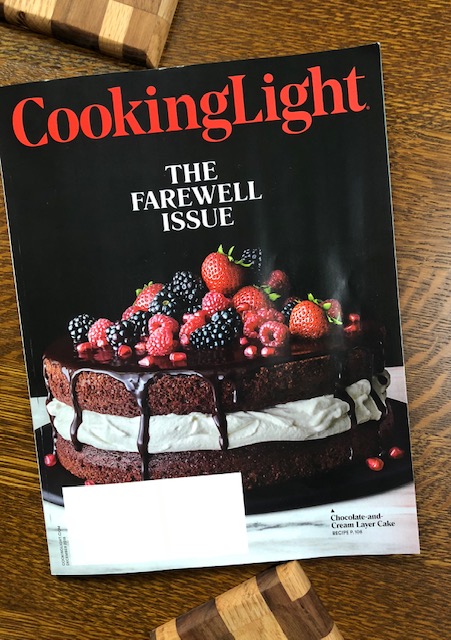 Is Lightening Up Recipes Still a Thing?

Despite the facts about diet’s role in heart disease, diabetes, and cognitive health (saturated fat should still be limited in your diet, and so should sugar. However, over-restricting all carbohydrates is not a proven diet therapy), it seems that the idea of “light” cooking is going by the wayside in favor of food rules revolving around food fad words (dairy-free, GMO free, organic, gluten-free). Recipes today often include calorie-heavy ingredients like avocado, nuts, seeds, butter, bacon, and olive oil. These are all healthy in moderation (ok, I’m still calling bacon healthy – it’s loaded with saturated fat and sodium. Yes it’s a great flavor booster and should be eaten in small portions), but sometimes, you can still go overboard with these ingredients, just as you can with sugar.

This new lifestyle ideology focuses on carbohydrate restriction, extreme exercise, and “cheat days”. In addition, we are also seeing extreme ways of eating (such as the “carnivore diet” which is exclusively meat only, or the very low carbohydrate “keto diet”. Even though a highly respected group of experts did not rank the “Keto diet” as one of the top 40 diets, it is very popular in mainstream media and gyms).

People seem to be drawn to these extreme diets and many seem to have an easier time completely avoiding a food or food group (like sugar) than having any small amount of it (at least temporarily – there’s the hitch). To me, both personally and professionally, this is a terrible way to live.

Food should serve as both nourishment and enjoyment. It should be balanced with your activity, and it should celebrate your culture. ~Rosanne Rust

Not exactly. It still comes down to balance. Working toward a lower carb diet doesn’t mean never eating a higher carb meal. To achieve a low carbohydrate diet takes careful planning. As researchers and anyone who has tried to switch to a low carb diet will tell you – it’s not easy to do (especially in the first 72 hours when the body fights it). You can’t just increase the protein and fat (or scoop on fat with abandon), you also still need to be aware of unhealthy saturated fat (the recommendation continues to be <7-10% of total calories) and other key nutrients including potassium, calcium, vitamin D, and fiber.

But if you are struggling to lose weight, or if you have been diagnosed with metabolic syndrome, reducing your carbohydrate intake (especially simple carbs like sweets, desserts, white bread) can help with weight loss in some people.  Don’t remove all carbs, just take the less healthy ones out, and reduce the portions of others. Ask your doctor to refer you to a registered dietitian who can help customize a plan for you.

Cheers and farewell to Cooking Light® magazine, but I plan to continue cooking light for many more years of healthy meals at home.