One of the reasons I started writing this blog was to help people search out the facts about nutrition, food, and diet trends, and sort out the false claims and fear-mongering headlines. With factual information, you can make better choices that are right for you (your health, and your food budget), avoid false promises, and enjoy eating for better health.

I’ve written about GMOs before, and they continue to be a hotly debated topic in the news. Many “controversial” topics often bring emotions into the opinions and reactions, but I encourage you to consider the facts, and also consider the source, giving credit to scientists who are evaluating scientific topics.

Here are a few things to consider:

So while the labeling proponents claim that they want all foods, that may contain GMO ingredients, labeled as such in the name of “your safety”, it seems that there could be an ulterior motive. I’m not against choice – I feel everyone should be able to put what they want in their cart, just don’t misinterpret a “GMO-free” food as better or healthier. And don’t force companies to change how they label their products when consumers already have a choice to choose Certified Organic if they want to.

My beef with the whole thing is when food manufacturers start slapping health claims or other claims on packaging, it does more to mislead the customer rather than inform. This has happened for years. In many cases products are labeled as “free” of something they never even contained. For instance in the 80s and 90s everything was labeled “cholesterol free” even if they did not contain cholesterol in the first place. “Sugar free” ice creams or apple pies are labeled as such since no sugar was “added”, but they may still contain natural sugars from the milk or fruit. Foods such as peanuts (peanuts have never contained gluten) or potato chips that naturally don’t contain gluten are labeled Gluten-free giving a false “health-halo” notion to shoppers. 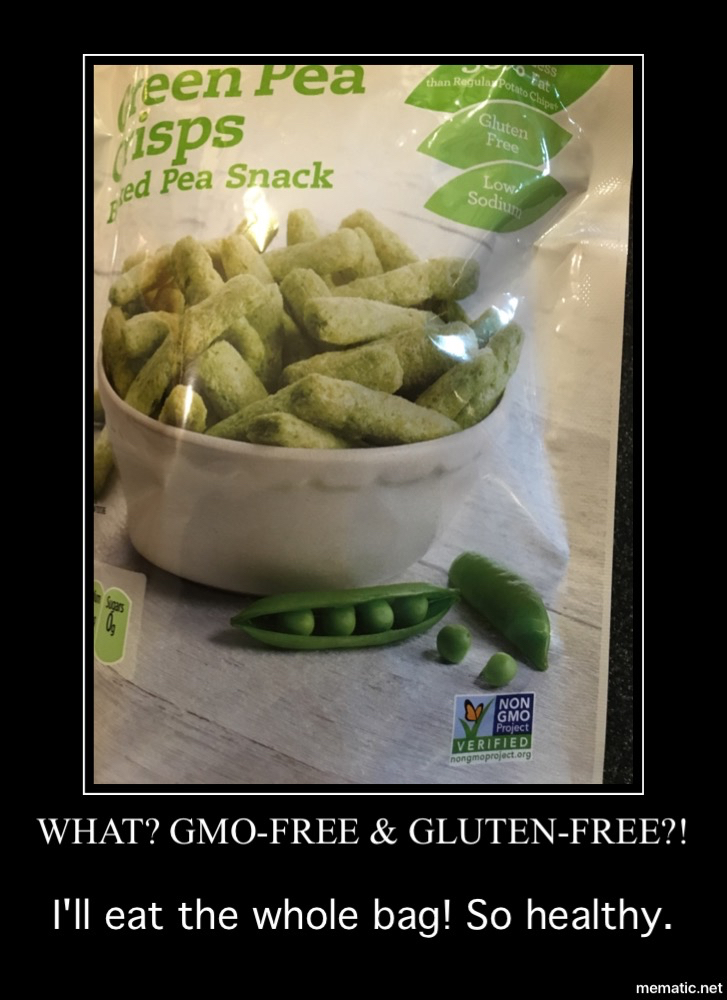 The GMO labeling will bring the same confusion, and will provide no useful information to customers concerned about choosing a balanced diet to improve their health. It’s already encouraging food manufacturers to slap random labels on their products.

My Plea to Food Companies

Just yesterday Del Monte announced that they are moving away from GMO ingredients. Sadly, Vani Hari, aka Food Babe, endorsed this move as super-awesome-great-news!. Worse, Del Monte publicly applauded Vani on Twitter and happily accepted being part of the “Food Babe Army” (aka a bunch of people with little to no food science background who protest food ingredients for no good reason).

Last fall Chobani announced their products would be “GMO Free”. And of course you’ve likely heard all about Chipotle, and their “food integrity” campaign which shuns GMOs.

I understand that food marketing is about a bottom line. Without sales, there’s no company. Food marketers are constantly looking at their target consumer, and will cater to them no matter what. It seems that whatever the consumer wants on the label, is put there to sell more of the product. Such is the case for many of the voluntary GMO-free products on the market. Some companies have caved and removed all GMO ingredients in an effort to please the consumer. Some companies may even admit that they know there is no safety issue or functionality issue for the change in ingredients, they are literally doing it only to please the confused consumer.

DelMonte is now labeling their fruits and vegetables as GMO Free. But guess what? There are no GMO peaches or peas! There are currently nine GMO crops on the market, and one of them isn’t food (cotton). A GMO apple (non-browning) will also soon be on the market:

This list are foods that MAY be genetically modified, and does not mean that for instance, all potatoes are GMO.

To learn more about the science behind GMO and biotechnology visit GMO Answers.