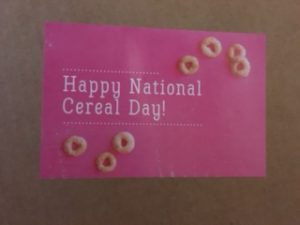 I received a gift and a some cereals to sample from General Mills but was not paid to write this post. 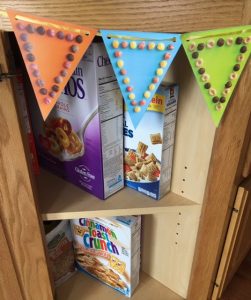 We are a cereal household. In fact, we have a “breakfast station” in the kitchen which includes the toaster oven, cutting board, bread knife, cereal bowls, plates, utensil drawer, and yes, a cereal cabinet. So when I opened the box from General Mills, everyone in my house was excited about it.

First off, I have three sons, two teenagers and one grown. They all have enjoyed ready-to-eat cereal since a young age (Cheerios were one of their favorite finger foods, and also traveled well). The teenagers enjoy a variety of breakfast foods, including cereal. Unfortunately the high school senior often just grabs a glass of milk in the morning (but it’s better than nothing. This became a new habit – as he always used to feel like eating in the morning up until this year – but I have faith he’ll get back into breakfast soon enough). In any case, he still enjoys a bowl of cereal as either an after-school or bedtime snack every day.

My husband leaves for work every day around 6:50 am and he eats a bowl of cereal before each workday.

When I opened the gift box from General Mills my youngest said:

“Trix! I’ve only had that at the neighbors house!”

I typically am not in the habit of buying “kids cereal” on a regular basis (when my children were younger, March was notorious in my house for Lucky Charms Month), but I’m glad that I received these samples to try, since General Mills has been reducing the sugar and artificial colors in their cereals. Here’s a run down of our “taste test”. 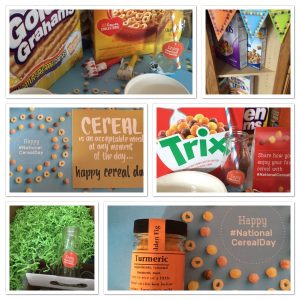 When people think “kids cereal” they often think it should be avoided because it’s loaded with sugar. However the sugar content isn’t as bad as you may think. Trix, Reeses, and Cinnamon Toast Crunch all have 9 grams of sugar per serving. Golden Grahams had the most at 11 grams per serving.

Compare those to say, a Raisin Bran type cereal (18 grams sugar per serving) and it’s not all bad. Or you can compare them to many granola cereals – which have anywhere from 12 to 15 grams of sugar per serving. This would be an example of a “health halo”. Granola or bran is associated with “healthy” while “kids cereal” is associated with “too much sugar”. But in reality, this isn’t necessarily the case. And, there’s no reason not to eat the cereals that you enjoy (using serving sizes as your guide)!

Keep in mind that a bowl of cereal is just one small part of your diet. You or your children can enjoy sugar-sweetened cereal occasionally by balancing your overall diet. Children who enjoy a bowl of cereal with milk also benefit from the protein, calcium, vitamin D, potassium, and riboflavin from the milk. A quick bowl of cereal with milk will always beat “no breakfast”, and is also a better snack when you are craving something sweet, than say, a candy bar or piece of cake.

Foods that contain artificial colors have also been ridiculed over the years, even though the ingredients are on the FDA GRAS list. General Mills has committed to removing artificial flavors and colors and are using natural ingredients (turmeric and fruit and vegetable juices for example) to color cereals such as Trix®.

My kids have been enjoying every box of cereal, and I tried them all too. I really liked the Trix® 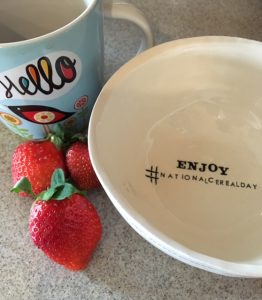 (which I admit to not having had in a long time) but the Reese’s (even though it had no more sugar in it than the others) tasted too sweet to me. My sons’ favorites remain the Cinnamon Toast Crunch and Honey Nut Cheerios.

As a mom I don’t fret over every gram of sugar (or fat or sodium) that my children consume. I know I’m providing a balanced diet – including fresh fruit and vegetables every day – and they have become very good at making their own choices, and self-regulating portions and what they need each day.