2016 Resolution: Fact Check Your Source, Leave out the Politics

Previous Next
2016 Resolution: Fact Check Your Source, Leave out the Politics

When I starting writing this blog four years ago my goal was to shed some light on the many misconceived views about food and nutrition. The new media has delivered. There continue to be so many conflicting messages, in some cases completely false, that get repeated by journalists and consumers until people believe they are true.

This may at times be intentional and at other times simply be the byproduct of soundbite news. A very small piece of the story is never the whole story, and consumers mistakenly use many of these soundbites to make decisions about what they choose to eat.

This past year has been abuzz with misconceptions about agricultural practices and our food supply. For the new year, I would like you to think critically, and not base your diet and health decisions on myth or misconstrued facts. Furthermore, do not give in to the fear-mongering (i.e., the attempt to use shock and awe tactics to make you feel that something is bad or dangerous or omnipresent). 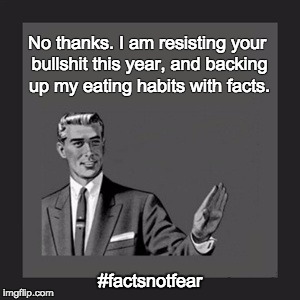 Myth: Hormone-free Poultry. It has been illegal for poultry to have hormones injected into them since the 1950s. Unfortunately some companies add “hormone-free” to their labels as a (misleading) marketing tool.

Myths About Milk. Folks are also overly concerned about hormones in milk. First off, it’s important to understand that hormones occur naturally in all plants and animals. Most hormones are protein-based. We tend to think about “hormones” in a negative way, perhaps envisioning steroid-type body-building hormones and such. But there are hundreds of various hormones circulating in humans and animals that we require for survival (insulin for one). Human milk contains growth hormones as well. BSH (bovine somatotropin hormone) is a growth hormone in cattle that is a naturally occurring protein. Around the 1950s it was discovered that BSH taken from a cow’s pituitary gland could be injected into the cow and increase milk production, and in 1993 a synthetic version (rBST, recombinant bovine somatotropin growth hormone) was created and approved for use. Even though these proteins are metabolized as any other protein – digested into amino acids, the “fear” of hormones has been one reason that people are avoiding cow’s milk in favor of almond milk. While these new “milks” can provide a calcium supplement to your diet, almond milk does not provide protein. So if you don’t tolerate cow’s milk, avoid it. But if you are substituting almond milk, understand that you are not getting the protein nor potassium benefit of cow’s milk.

Gluten-free Myths. Celiac disease is a real thing, and those who’ve been diagnosed properly by a gastroenterologist do need to avoid foods containing gluten. However, if you are following this trend because of something Gwyneth Paltrow said, then you may be suffering from a low fiber intake (among other issues). Most Americans only get about 15 grams of fiber daily, well below the recommended 25-38.

Cage-free Chickens Myths. Many of us enjoy a chicken dish every week. From Chicken Picatta to Chicken chili, to Chicken tenders, chicken is probably one of the most economical and versatile animal proteins available. Agriculture is an industry. Farmers are not growing pets, they are growing food. This idea that chickens are universally tortured by all chicken farmers is just wrong. Farmers generally know exactly what they are doing to raise the food that feeds the world. Misconceptions are generated when we confer human emotion to animals. I am not a farmer, nor a chicken expert, but we’ve had four to six backyard hens over the past few years. We keep them in a small “chicken tractor” and they lay eggs daily and seem happy (they also sometimes will peck each other, and will eat just about anything). If we were to let them roam our field, they’d probably get eaten by a fox, hawk, or raccoon (once a raccoon, we assumed, actually opened the hatch and helped himself to one of our hens. Nature finds a way).

Myth: Natural and Organic is Best. These two terms are often misinterpreted as “Better”. Not completely so. The term ‘natural’ has very little meaning, while the term Organic, referring to Certified Organic, is clearly defined. There is nothing wrong with choosing organic foods, but there is also no significant benefit overall. I don’t like to hear pro-organic people shaming others with “if it’s not organic it’s not as good” (Chipotle anyone?). And when it comes to packaged foods – there’s definitely no benefit to an organic cracker, cookie, snack bar, or other packaged snack food.

Myth: Organic food is better because they don’t use pesticides. Organic farming does indeed use pesticides to ward off pests. Organic can’t use synthetic (man-made) pesticides (or synthetic fertilizers). The pesticides they do use are chemicals nonetheless, they are just naturally occurring ones. You are falsely led to believe that a pesticide made with household detergent and vegetable oil is “better or less toxic” than a synthetically made one. They are all chemicals just the same, that kill bugs in the right dose. Bt (Bacillus thuringiensis) is the most common pesticide used in organic farming, and coincidently, the same bacterium used in GM technology to produce pest-resistant plants.

Myth: You Need to Avoid Genetically Modified Food Ingredients. GMO is the buzz term du jour. Many people are avoiding “GMO” and have no idea why. Others confuse the potential environmental impact of GMO with food safety. Nature itself performs genetic modification daily. I have stray barn cats with six toes. Nature made them this way. The fact is, farmers use genetically modified seeds to produce hardier crops. Technology has made farming more productive and sustainable, and there’s quite a bit of scientific consensus that GMOs are safe.

Myth: Factory farming is bad. To this myth, I can only say two things – The production of food for 7 billion people has to be industrialized in order to provide the volumes needed. We should be grateful that we have choices (conventionally grown, locally grown, organically grown).

Chew the facts, not the myths.

My concern here is that it’s not only maddening to hear false claims, but also that when people believe these popular myths, they are either avoiding healthy foods unnecessarily. Keep in mind, when the media picks up a story, there is an entire profession that already knows everything about that story, and has been working in that industry for years and years. In other words, “it’s not news to them”. Whether it’s nutrition, aerospace, petroleum engineering, or the current hot topic: Agriculture; the professionals working in those fields know more about them than the news reporter.

It’s also important to keep in mind that food activism is what often brings these stories to the newsreel.

Activism: a doctrine or practice that emphasizes direct vigorous action especially in support of or opposition to one side of a controversial issue.

Note that the definition of activism includes “in support of or opposition to ONE SIDE…”.

In this era of political divisiveness, we need to emphasize the need for open dialogue, about the facts, all the way around the block. If we could take politics out of the food-heatlh discussion, and we could get a lot further in the effort to improve public health on, just the facts m’am.