I was recently invited to a workshop about farming and technology, sponsored by the 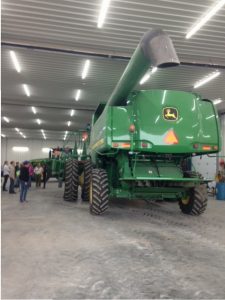 Monsanto company. My travel, hotel and meals were covered, however I was not compensated, nor paid to write this blog or any other social media communication.

Are you afraid of GMOs? Do you know what the acronym means? Have you ever been  on a farm? Recently? Have you ever spoken with a geneticist, toxicologist, animal scientist, or farmer? Did you know that modern farming is highly technical, and that essentially most farmers are scientists as well?

Knowledge Alleviates Fear – Distance from the farm may add to it.

I’m fortunate, in my work, to be able to get up close looks into the food industry, and have enjoyed learning more about agriculture over the past year. There’s always two sides to the story, and there is a lot of disagreement about the need or safety of genetically modified crops. Some people are completely against them, perhaps in favor of organic food or “natural” foods (a term without much meaning), while others feel the technology allows for more cost-effective farming and agriculture – for instance, pest resistant crops are more consistent, yielding more food or feed per acre. When the farmer can till less often, by using cover crops, and plant crops closer together (because of better weed management and consistent yields), the farmer is able to be much more productive and cost-effective (less energy use, less time, more output).

GMO stands for genetically modified organism. GM crops have been on the market in the U.S. since the mid-1990’s. As of now, there are currently seven GM food crops available on the commercial market in the U.S, (as well as cotton):

Two additional crops, potatoes and apples, are approved to grow and sell and should be coming to the market soon. Using this GM technology is incredibly more precise than traditional cross-breeding. You can think of genetic modification as simply introducing one desirable gene into a sequence, whereas traditional plant breeding introduces multiple ones.

Monsanto, like any large corporation, is filled with people. You may know that Monsanto develops herbicide tolerant, insect tolerant, and draught resistant crops. What people don’t know, is that much of Monsanto’s work over the years (past and present) involves innovating farming technologies, such as:

Unlike popular belief, plants aren’t “doused” but diluted concentrations are sprayed early in the crop’s life). Insect tolerant plants are those in which one specific gene is genetically inserted into the plant to resist pests to that plant (such as Bacillus thuringiensis Corn that repels the corn borer). The benefit of these methods include reduced tillage (and labor), conservation of soil and fuel, and overall reduced use of herbicides. I visited three cattle farms over the past year, including one in Iowa, and I’ve learned a lot about beef and dairy production by visiting each of them (and the other two are not connected to Monsanto). I think the best way to learn about any science or specialty is to speak directly to the scientists who work in that area daily. As a dietitian, I have a fairly strong science background, but I’m no biochemist or geneticist. In my experience over the years, every scientist I’ve met in person, is a really nice, laid back, super-smart, geek (I mean that in a good way). The smart men and women I met, on my visit to Monsanto’s Huxley Learning Center in Des Moines, work for the company because they have the education required, love what they do, and love the land. They truly want to work with farmers to help make their jobs easier.

Who to Trust? I say scientists, over Food-babe-types

There’s a huge trust and literacy gap between scientists and the public. A recent Pew Research Study showed that 88% of American Association for the Advancement of Science (AAAS) scientists think eating GM food is safe, while only 37% of the public believes that’s true. The question is, why is there such lack of trust when there’s strong scientific consensus that GMO crops are safe? While scientists attempt to communicate the facts about GMO, celebrities dish out nonsense. And it’s the science that often doesn’t get the ear of mass media. There is a sector of the public who want all foods with any GMO ingredients to be labeled as such. While they argue it’s a “right to know” issue, it seems unnecessary since there’s scientific consensus on GMO safety.

Unfortunately there are also extreme non-science-based-consumer-advocates (e.g. Food Babe) demanding food label legislation, misleading and inducing consumer fear while putting pressure on the biotech industry. Sadly, many anti-GMO activists will say just about anything, and many are spreading misinformation on a variety of food and nutrition topics. There’s this push-pull between “big food” and the “organic industry”, when in fact, there’s room in the market for both (and it’s completely unrealistic, and would not be energy-conservative, to grow and provide only organic crops). Presently, if consumers choose to avoid GMOs, they can choose certified organic foods (which are already GMO-free as part of the organic certification system).

There are a lot of GMO-haters out there and the Monsanto company in particular is often singled out even though they do other work and aren’t the only company working in biotech. I ask you this: If you are against GMOs, at least make an effort to speak with a scientists who studies them for a living, or read some of the science literature for yourself. Ask the scientists your questions directly. Progress doesn’t happen without some sacrifice, but in the absence of a plan, there is no progress. And not moving forward has a negative impact on the world as well. Consider asking intelligent questions and understanding both sides of the issue.