Previous Next
Cattle Farm Q & A

My previous post gave you a glimpse of my recent cattle farm tour. This post will offer you some facts about cattle farming.

I was aware, prior to my tour to the cattle farm, that there is a lot of misconception about cattle farming; particularly feedlot versus grass-fed. Cattle are amazing animals. Cattle are unique in that they are protein-builders. They can take grass, and create protein. As more people are wanting to know “where does my food come from”, I want to share what I saw and learned during this tour.

After our tour of the farm, we had the chance to listen to a panel of experts and ask questions. 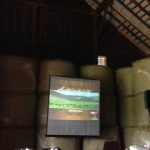 Dr. Scott Barao has a bachelor’s degree in nutrition and a PhD in beef cattle nutrition and management. In addition to serving as Executive Director of the farm, he currently develops and demonstrating profitable and sustainable models of beef cattle production for producers in the Mid-Atlantic region.

Jim Hogue is a founding partner in Agri-Basics, Inc and is a Livestock Nutritionist. He formulates livestock rations, works in feed management, and provides nutrition recommendations to cattle feeders and producers in Pennsylvania, Maryland and Virginia.

Q: What is the difference between grass-fed and a feedlot?

A: While Hedgeapple is a grass-finished farm, raising and finishing the cattle at pasture on grasses and hay, other farms have different models. Barao told us farms should be managed based on their resources and land. In contrast to a pasture-raised system like the one at Hedgeapple Farm, other farms may raise calves on pasture, and then transport them to another farm. When old enough, they move them to a feedlot, which provides grain-based feed in addition to grass or hay in the pasture. Larger farms require higher production, and the animal adapts to a feed ration that promotes growth.

Q: Is a pasture-raised model safer or better than feedlot raised model?

A: Not exactly. The supplemental feed rations that include grain, fatten the cattle up a bit more quickly.  “We aren’t really feeding the animal, we’re feeding the rumen”, says Barao. The rumen is a digestive organ unique to cows and other “ruminant” animals (goats, sheep). The food they eat enters the rumen before the stomach and small intestine, and the bacteria and protozoa in the rumen work at breaking down the food so it can eventually be absorbed. When you hear the term “chewing their cud”, this refers to the partially digested material that the cow essentially “spits up” and then chews some more (letting saliva do some digestion) before swallowing for further digestion.

The bottom line is, in some parts of the country, there’s just never going to be enough grass available for cows to eat.

Life exists because of 6 inches of topsoil, and because it rains once in a while. ~ Jim Hogue

Q: It is true that cows can’t really digest grain, and all cows should only eating grass?

Jim Hogue shared some great insight into how cows eat and what they tolerate.  It’s true that a cow can naturally digest grass, however it’s also true that they are adaptable. In addition, farms must also meet the demand for beef, and grain feeding helps with production. Mature cows (1-1 ½ years old) will be delivered to a feedlot and are “finished” there for 4-6 months by feeding on the ration. When a cow is introduced to grain-based feed, or other plant material (fruit, vegetables), it has to be done gradually over a period of about 10-21 days and with supervision. Once the rumen adapts, the food is digested without issue. This gradual introduction happens with any sort of new feed ration (consider that some farms may purchase leftover fruits and vegetables from grocery stores that would otherwise be wasted and end up in a land fill – cows doing their share for the environment). Rations may also include ionophores – FDA-approved antibiotics that alter the rumen by creating “good bacteria” (as a environmental bonus – these ionophores also reduce methane gases). So the next time you think, “cows were only meant to eat grass”, consider the scientific-balanced formula that is individualized for cattle on every single farm.

A: While grass-finished beef touts a better nutrition profile (it’s is often lower in fat, higher in omega-3 fatty acids, and higher in CLA, and higher in beta-carotene) I don’t count this as significant.

It’s a great idea to buy local when you can, but it’s also still fine to include traditional cuts of lean grain-fed beef in your diet as well. While you do want to increase your omega-3 fatty acids, I wouldn’t suggest doing so by eating beef (you want to include plant-based sources of omega-3 instead, such as olive oil or walnuts). And you’ll also want to get your beta-carotene from eating more vegetables.

There’s one thing for sure – all of these animals are well taken care of. I’ve never doubted this myself, living in a 4-H area, but I know there are some Americans who may. Farmers, and the veterinarians and scientists that they work with, care about the land, and they care for the animals they raise. The other interesting point, is that cattle nutrition needs should be as individualized as human nutrition. Farmland methods also needs to be individualized based on land, manpower, and natural resources. Our future productivity of food depends on the science and strategy of experts such as the ones we met during this tour.

Disclosure: I was invited by the Northeast Beef Promotion board to tour Hedgeapple Cattle Farm, but I was not paid to write this post.