Nutrition is still a fairly young science, continually evolving. The question: “What is the healthiest diet?” can’t truly be answered, but people do want to know: “What am I supposed to eat?”

The 2010 Dietary Guidelines for Americans offer basic guidelines for the population. I have adopted these guidelines myself, and recommend them. (Keep in mind, that from a public health standpoint, we have to make recommendations for the general population). The Guidelines are based on scientific research, and aim to reduce the risk for disease. Does this diet “work”? Well, as for myself, other than some arthritis, so far so good. This diet is working for me; and that may be the point: Follow a reasonably healthy diet that works for you, but be sure that it is balanced for key nutrients.

A recent weight loss study concluded that the major predictor for weight loss was “adherence” to the diet. The study published in the American Journal of Clinical Nutrition, randomly assigned several hundred overweight or obese people to one of four diets: average protein, low fat and higher carbohydrates (carbs); high protein, low fat, and higher carbs; average protein, high fat and lower carbs; or high protein, high fat and lower carbs. Each of the diets was designed to eliminate 750 calories a day from the people’s energy needs.

At six months, people eating either a higher protein diet (25% protein, 35% carb, 40% fat) or the higher carbohydrate diet (15% protein, 65% carb, 20% fat) had lost more than nine pounds of fat and close to five pounds of lean mass, but some of this was regained by the two-year mark (most regaining about 40% of the losses). Adherence for the extremes (high protein or high carb) was difficult, and in fact most participants were actually consuming a diet that was about 20% protein (not 15% or 25%) at the 2-year mark. This amount of protein is in line with the Dietary Guidelines for Americans – a reasonable, but not “high” amount.

After six months, and again at two years after the diets started, the researchers checked in on people’s weight, fat mass and lean mass to determine if different amounts of carbohydrate, protein and fat impact weight loss even when total calorie intake remains constant. There were no significant differences in body fat composition or abdominal fat between all of the diets within the two-year period.

I personally have never been able to reduce my carbohydrate intake to “low” for any amount of time, (it makes me feel bad – low energy, unfocused, cranky) but some people enjoy following a low carb diet, and may even lose weight doing so. I have no problem with that – the “best diet” may indeed be the one you can follow long-term. What I do have a problem with is anyone who insists that “THIS” diet (in other words the one that they eat) is the best one. While my goal is always health and well-being, often others’ goal is “skinny” or “sexy”…I’m not impressed.

So there’s been a lot of buzz recently over the “Paleo Diet” (also called Paleolithic diet or caveman diet), which is a diet that focuses on meat, and includes eggs and fruit – foods which followers of this lifestyle feel we humans are most genetically adapted to accept. The dietary claims of this Paleolithic lifestyle include better athletic performance, less acne, weight loss, and disease risk reduction. It completely omits dairy, all grains, legumes, and vegetable oils. When lean protein is chosen, and eaten with lots of vegetables, this diet can be healthy, although restrictive (it’s a great idea to limit junk food, but this diet omits all breads, all pasta, rice, cheese, milk, etc). The diet is highly restrictive, so difficult to follow long-term, but it also can be socially di 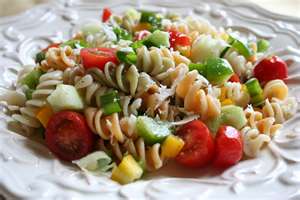 sruptive (in other words, forget about going to the neighbors barbeque, unless they also follow a Paleo diet, because you may be overwhelmed with limited choices and be at risk for appearing rude since you’re always avoiding certain foods and won’t try their new veggie pasta salad dish).

Bottom line: The Paleo lifestyle is not for me. I enjoy a variety of foods and don’t love protein enough to eat a lot of it at each meal. I don’t want to live out my days without toast, sandwiches, cheese or pasta. I think those who wish to follow such a diet can safely do so by making sure to use proper guidelines; but don’t ridicule those who haven’t adopted your lifestyle.

What are your thoughts on the Paleo craze or other fad diets?