Which is Better: No Calories, or Some Calories for Breakfast for kids?

Previous Next
Which is Better: No Calories, or Some Calories for Breakfast for kids?

God bless the Italians for inventing Nutella®, a delicious chocolate, nutty spread. In the 1940s, Pietro Ferrero, a pastry maker and founder of the Ferrero company used hazelnuts, which are plentiful in the Piedmont region of Italy (northwest), to extend the chocolate supply. At the time, there was very little chocolate because cocoa was in short supply due to World War II rationing.

Apparently a California mom was recently shocked to find out it contained 21 grams of sugar, 200 calories, and 11 grams of fat, and therefore proposed a class-action suit against Ferrero stating that she had fed her 4-year-old daughter Nutella® after seeing advertisements that suggested the spread was part of a healthy breakfast. Really?

Apparently, since I bought Nutella® during this period, if I hurry, I can win some money (about 4 bucks actually)?

Can’t we all just get along? This California mom must have a lot of time on her hands. In case you don’t know, advertising was created to sell products. Is there “truth in advertising?” Yes and no. There sure is money in it, and money makes the world go ’round sister. We would have absolutely NO media without advertising, nor would we have many products. Advertising has entertainment value too – Who would want to watch a boring Super Bowl if there aren’t any good commercials during the game, right?

So let’s break down this Nutella® debacle a little bit, starting with the commercial in question itself. In the commercial, a mom claims that Nutella® is great for breakfast – it gets her children to eat in the morning. She spreads in on whole grain toast and serves it with milk.

As far as I’m concerned the commercial doesn’t say “This is really nutritious”, it states “….kids will want to eat it.” and “Breakfast never tasted this good.”

Gosh, no matter how hard I try, I just can’t get away from bringing up sugar – again. I think this ‘lawsuit-mom’ outrage stems from the just-won’t-die-idea that “carbs are bad”, “sugar is evil” and we need a lot more protein (Paleo, man – don’t get me started). You should not consume a diet heavy in sugar, but this does not mean you have to completely eliminate it. Unless you want to (or have diabetes or metabolic syndrome). The fact that Nutella® is high in sugar and lower in protein is most likely what caused this mother’s “shock”, since she clearly equates anything with 21 grams of sugar in it as evil. What do you think is in the average Continental Breakfast? There are 32 grams of sugar in a Starbuck’s Blueberry muffin for goodness sake.

Now let’s take a look at something moms have been using for decades: Peanut butter. I’m giving you nutrition facts for two tablespoons, (in the Nutella® commercial, I’d estimate the amount spread on one piece of toast was less than a tablespoon though).

Maybe this negative publicity will encourage Nutella® to reformulate the product with less sugar (I doubt it, Italians are stubborn. I know first hand, I am one). Obviously changing up the sugar content would change the entire flavor and consistency of the product. So, since that’s unlikely, either you choose to buy it, or not. Like it, or leave it. But don’t demonize it (or sue every food company and restaurant on earth) unless you want to completely scrutinize every morsel you put in your mouth. It’s the whole diet that counts.

Here are some nutrition facts:

A breakfast of 2 pieces of  whole wheat toast spread with 1.5 tablespoons of Nutella® (more the portion I’d use) and an 8 ounce glass of 1% milk:

Nutrition in no breakfast: 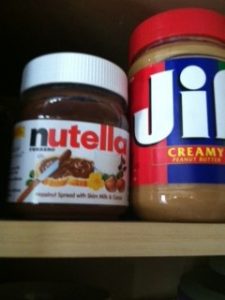 While I have no affiliation with Nutella®, it happens to be in my pantry. I like it on a banana for an occasional mid-day snack. My 10 year old loves Nutella® sandwiches for lunch about once a month.